At least 15 miners have been trapped in a private coal pit in a remote village in South Garo Hills district of Meghalaya since Friday. A rescue operation has been launched by the National Disaster and Rescue Force on Thursday.

Official sources said that over 30 miners had gone down to the pit at Nengkhol village in Nongalbibra area. They accidentally punctured the wall of an abandoned mine full of highly acidic water on Friday evening.

As the water from the abandoned mine rushed into the pit, 15 miners managed to escape, the sources said.

The rest are still trapped and hopes of getting them out alive were getting dim, they said.

The district administration has engaged 10 pumps to drain the mine to rescue them, while two teams of the National Disaster Response Force, based in Guwahati, arrived at the spot late on Wednesday night and launched the rescue mission on Thursday.

Three persons -- the mine owner, a foreman of a clan and a head labourer -- were arrested in connection with the incident and booked for causing death due to negligence, the sources said.

The South Garo Hills district administration has ordered a judicial enquiry into the incident, they added.

Mineral-rich Meghalaya does not have a mining policy and coal and other minerals are extracted by mine owners using the rat-hole method, without any mechanism to ensure the safety of miners.

Villages in the coal belt in the state are virtually standing on a network of underground trenches dug to mine coal. 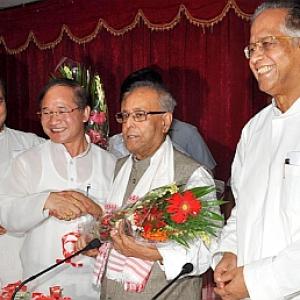