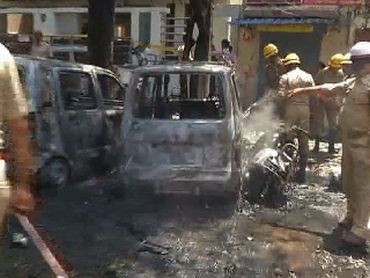 A blast has been reported outside the Bharatiya Janata Party office in Bangalore, injuring 16 people including seven policemen.

Two persons on a motorbike hurled the bomb in between cars outside the BJP office at Malleshwaram in the city on Wednesday morning. Police sources say that it was an explosion that was caused by a bomb and not the LPG cylinder as reported initially.

Seven Karnataka State Rural Police personnel and nine civilians have sustained injuries in the blast. Two are said to be serious.

The police are having a tough time to find evidence of the material used in the blast. Immediately after the explosion there was a fire. Water was used to douse the fire and the police suspect that a lot of evidence was washed away.

However, as per eye witness accounts, the police say that two persons on a bike hurled the bomb in between two cars.

A motorbike with an "incendiary bomb" was used, he said, adding the bike was planted in the midst of cars, he added.

"At this stage, I can't say what kind of explosion it was", said the police chief.

The injured have been shifted to hospital where two civilians are in a serious condition.

Three cars and some other vehicles were damaged in the blast, B G Chengappa, director, fire services, said.

According to eye witnesses, a loud noise was heard and some vehicles went up in flames, sending the people to flee in panic.

Police have cordoned off the area.

With Karnataka going to assembly polls on May 5, the BJP office, located in a residential locality, is crowded with party workers and others.

Today is the last day for filing of nominations.

Image: The site of the blast at Malleshwaram in Bangalore