A powerful explosion at an Indian restaurant in Canada’s Ontario province injured 15 people, three of them seriously, when two unidentified men detonated an improvised explosive device, police said on Friday. In an early morning media briefing, Peel Regional Police Chief Jennifer Evans said that there is no indication that the explosion was an act of terrorism or hate crime.

Three persons have suffered “critical blast injuries” and were rushed to a Toronto trauma centre, the report said.

Police said that the incident occurred at ‘Bombay Bhel’ restaurant in Mississauga.

Health officials have rushed 15 patients to hospitals, the police said.

Their injuries were “consistent with those of an explosion,” said Brian Gibson, deputy chief at Peel Regional Paramedic Services. 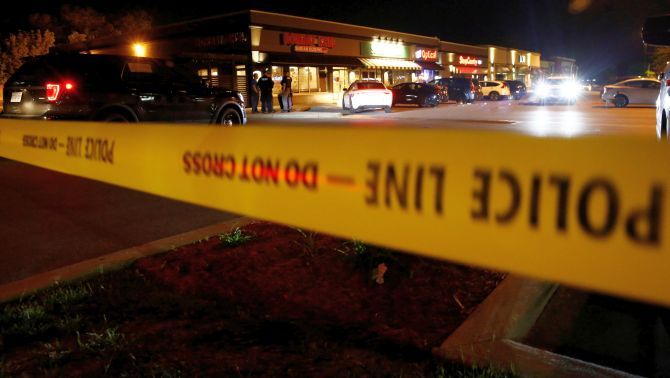 IMAGE: Cops said that there was no indication if the blast was an act of terrorism or even a hate crime and that they were investigation all angles. Photograph: Mark Blinch/Reuters

In New Delhi, External Affairs Minister Sushma Swaraj said that Indian missions in Canada are working round the clock after the blast.

Swaraj said she was in constant touch with India’s consul general in Toronto and the high commissioner in Canada.

“I am in constant touch with our Consul General in Toronto and Indian High Commissioner in Canada. Our missions will work round the clock. The Emergency number is: +1-647-668-4108,” she tweeted.

Canadian Police said that two suspects detonated the improvised explosive device in the restaurant and fled.

Police have issued CCTV footage of the two suspects.

It was not immediately known as how many people were inside the restaurant when the incident took place.

The motive for the attack was being investigated.

The shopping plaza in which the explosion took place has been sealed off, Peel Regional Police said in a tweet.

Rafael Conceicao, a student from Brazil, was on the patio of a restaurant close to Bombay Bhel when he heard the explosion, and rushed to help.

Andre Larrivee, who lives nearby, said he was watching television and heard a loud explosion.

“It was really loud,” he said.