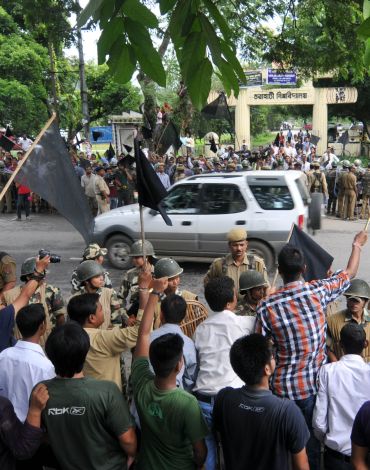 Assam Chief Minister Tarun Gogoi was greeted with black flags by the students of Gauhati university while he was travelling through the varsity campus from the airport to his official residence after his arrival in the state.

The students were protesting against the India-Bangladesh land pact that was signed on September 6 during the prime minister's Dhaka visit. Gogoi was part of the PM's entourage to Dhaka along with three other chief ministers from the North East.

Gogoi returned on Saturday as he undertook another journey abroad from New Delhi immediately after the trip to Bangladesh with the PM. Students of Gauhati university, a strong bastion of the All Assam Students' Union, line up the NH 37 stretch passing through the varsity campus to register protest against the land deal which they believe, will facilitate handover of Assam land to Bangladesh.

As the protest against the India-Bangladesh land pact gains ground in the state notwithstanding the Gogoi government's firm claim that the state stands to gain immensely from it, opposition Asom Gana Parishad and the BJP are apparently coming closer to cash in on the situation to put the ruling Congress in as much discomfort as possible.

The AGP is banking on the BJP and other National Democratic Alliance allies to raise the issue of India-Bangladesh land pact in the Parliament. Its MPs have been instructed to coordinate with the NDA allies especially the BJP and Shiv Sena to try putting the UPA government on the mat over the land pact that has triggered strong protest in Assam. Both the AGP and the BJP are taking lead it anti-land deal stir in Assam.

Meanwhile, rattled by the vociferous agitation against the land pact, the ruling Congress is organising a briefing for its legislators and district Congress presidents on Monday by chief minister Gogoi on the land pact so that they could counter the protest with real facts.

Advani's yatra is not to compete with Anna's campaign: BJP 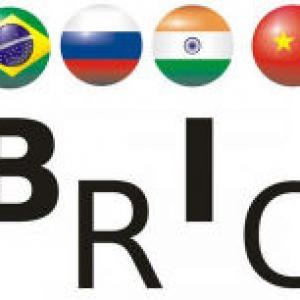 BRIC nations' debt to remain unchanged for next 5 yrs