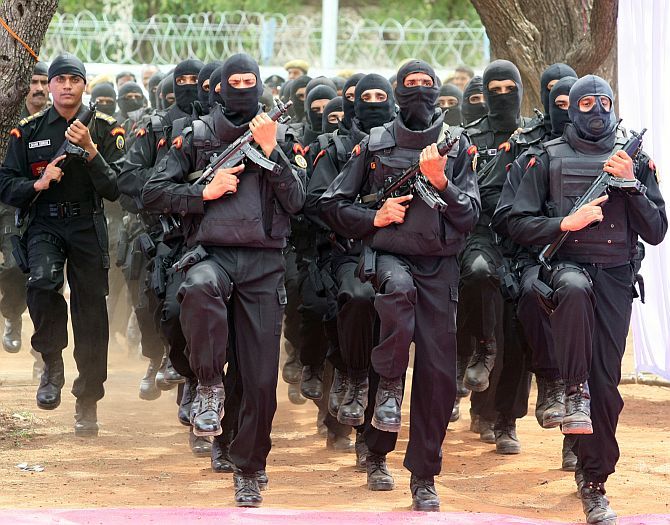 'Black Cat' commandos of the elite counter-terror force National Security Guard are set to be deployed soon in Jammu and Kashmir to help security forces in dealing with encounters and hostage-like situations, officials said on Monday.

The Ministry of Home Affairs is examining a proposal to deploy a contingent of the NSG commandos in the Kashmir Valley so that they can join the Indian Army, the Central Reserve Police Force and the state police when a high-risk militancy related incident takes place.

"We are planning to deploy the NSG in Kashmir. They are trained to deal with terrorists and hostage-like situations. We are mulling over it," an official told PTI requesting anonymity.

Director General of Police, Jammu and Kashmir, S P Vaid had also said recently that he has been working on the proposal. "Hope I will be successful," he had said.

This is not for the first time that the NSG commandos, popularly know as 'Black Cat', would be deployed in Jammu and Kashmir. The commandos of the elite force have been deployed in the Valley in the past too.

Their special skills of carrying out house intervention and hostage rescue can act as 'clincher' during a terror siege, the official said.

Union Home Minister Rajnath Singh, during a recent NSG event in Telangana, had said the government is planning as to how the force's role could be 'enlarged' vis-a-vis the new security challenges faced by the country, as these commandos can play a 'big role' in operations such as those where terrorists take a human as shield and enter civilian premises.

The move to deploy NSG commandos in Kashmir comes in the wake of increasing incidents of encounters where security forces have lost many soldiers during high-risk house intervention operations in densely populated localities.

The NSG commandos, when allowed, would get opportunities to test their skills and it will be a force-multiplier for anti-militancy forces deployed in Jammu and Kashmir, another official said.

Normally, a small NSG team comprises five commandos led by a non-commissioned officer along with bomb experts and crack marksman.

The commandos use sophisticated Heckler and Koch MP5 sub-machine guns, sniper rifles, through-the-wall radar and C-4 explosives to eliminate holed up terrorists without causing much damage to the structure.

The NSG was raised in 1984 in the aftermath of Operation Blue Star, which was carried out to flush out terrorists hiding in the Golden Temple in Punjab's Amritsar.

There are around 7,500 personnel currently working with the NSG.

As many as 60 incidents of terrorist violence have taken place in Jammu and Kashmir from January till mid-March this year, killing 15 security personnel and 17 terrorists, according to data provided to Parliament.