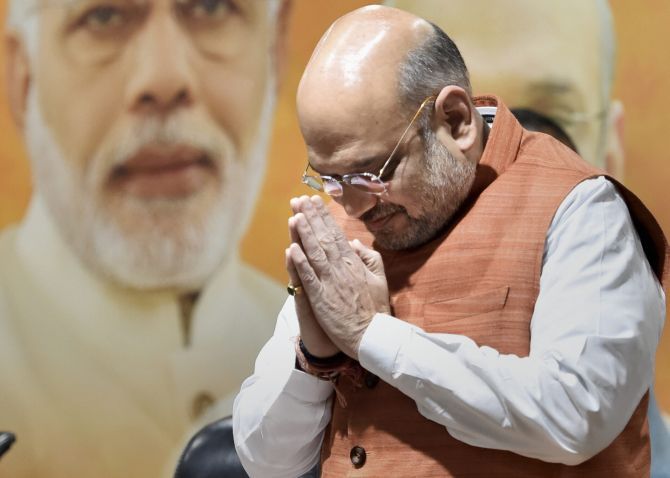 Asserting that Bharatiya Janata Party's return to power in 2019 is 'not a challenge but a certainty', its president Amit Shah on Saturday projected the next Lok Sabha polls as a contest between Prime Minister Narendra Modi's efforts to 'remove corruption and poverty' and the Opposition's single-point agenda of 'Modi Hatao' (replace Modi).

On the Modi government's fourth anniversary, Shah listed details of its 'successes' and heaped scorn on the likely challenge from Rahul Gandhi-led Congress, saying he may have declared himself a prime ministerial candidate but his bid has not got support from even his party colleagues, let alone other opposition leaders.

Projecting Modi as the 'most popular and most hardworking prime minister with unending energy', Shah said he replaced the United Progressive Alliance's policy paralysis with a policy-driven government working for the poor and improved economy while also raising the country's esteem in the world.

Asked about the 'achche din' (good days) promised by the BJP-led ruling alliance when it came to power, Shah said the government has 'done a lot to fulfil its promises in four years and one year is still left'.

The BJP president came down heavily on the Opposition saying a shocking change has happened in the country's politics with those against the prime minister resorting to lies and speaking it loudly all the time.

"This is something new I am seeing and the Opposition seems to have decided to continue with this tactic till the 2019 polls... Its one-point agenda is 'Modi hatao' while the BJP and Modi want to remove disorder, corruption and poverty to usher in stability and development," Shah said at a press conference.

Playing down the challenge from a united Opposition, he said people are standing by Modi like a rock and the prime minister's politics of performance will prevail over those promoting politics of dynasty, casteism and appeasement.

Taking on the Congress, which has accused the government of peddling lies and Modi of harming the dignity of his chair, Shah said the BJP is ready for a debate over facts and figures about the Centre's achievements.

Countering the charges, the BJP president said the honour of the prime minister's chair had hit rock bottom under the Congress-led UPA, as he took a dig at former prime minister Manmohan Singh, remarking that Modi does not need to seek anybody's permission before taking a decision.

Singh was often accused by critics of being guided by the then Congress president Sonia Gandhi in his decisions.

"The Congress will not decide about the dignity of the prime minister's chair. People have done it. They have replaced its 14 state governments (with BJP)," he said.

Asked if he saw a challenge from a united opposition or Rahul Gandhi in 2019, Shah said there is no challenge and its return to power is a certainty.

Referring to Gandhi's comments during the Karnataka assembly polls that he may be prime minister if his party gets the required numbers, Shah said no Congress leader came out in support of his statement, nor did opposition leaders like Sharad Pawar, Mamata Banerjee or Akhilesh Yadav.

Asked if the government has delivered on its promises, he said it has made successful efforts to change the lives of 22 crore families, referring to welfare schemes like providing LPG cylinder, houses, electricity and toilets among others to the poor, as also efforts to improve the country's economy and security of its borders.

Whatever be the opposition's lies, those who have befitted from the government schemes will remember it, he said, underlining his party's welfare plank.

To a question about the Telugu Desam Party leaving the National Democratic Alliance and the saffron party's turbulent relations with another key ally Shiv Sena, Shah said he wants its alliance with Sena to continue and added that 11 new parties, including Nitish Kumar-led Janata Dal-United, have joined the ruling bloc.

He also discounted the likely challenge from Samajwadi Party-Bahujan Samaj Party alliance in Uttar Pradesh, saying the media had declared the grouping of 'two boys', a reference to SP chief Akhilesh Yadav and Gandhi, a winner in the state assembly poll before the results came, but it was the BJP that swept the election.

Shah also said that the BJP's win in 104 seats in Karnataka is a good sign of its expansion in south India.

Asked about Pakistan's continued support to terrorism in Kashmir despite Indian Army's operations, including surgical strike, and if war was an option, he said, "War is the last resort. It is not an option. Maximum number of terrorists have been killed in the last four years."

Shah also said the government is also working on long-term policy to deal with soaring petroleum prices. He claimed that in three years of the UPA rule, petrol and diesel prices were as high as they are now.

He also maintained the BJP's position on the Ram temple issue, saying it wants the issue to be resolved either through courts or dialogue.

Stating that no village is without power now, Shah said the government recently covered 16800 villages, which had over 50 per cent Dalit population, with its seven welfare schemes, Jan Dhan bank account, toilets and LPG cylinder for all homes, and will cover 65000 villages by August 15.

The Modi government ended an era of instability and has delivered on its two key promises, that it will work for the poor, Dalits, tribals, backwards, farmers and village, and that it will raise India's esteem in the world. It has fulfilled both, he said.