'Legally, anything can be promised in the manifestos. However, the SC has said the promises should not be unreasonable' But, the move does raise ethical question as the model code of conduct is all about ethics, said S Y Quraishi, who served as the poll panel chief between 2010 and 2012.

O P Rawat, who retired as the chief election commissioner in December 2018, reminded that the Supreme Court had made it clear that a party promising something in its manifesto should also mention the budgetary provisions it would put in place to fulfil the promise.

One can put anything in the manifesto, but the Supreme Court has ruled that parties have to explain the budgetary provision required to fulfil the promise, Rawat said.

Another former chief election commissioner, who did not wish to go on record, said the timing of manifesto release is also important.

"The EC has so far not been able to implement the suggestion that manifestos are released well in advance and not on the eve of the poll," he pointed out.

He also said that in one of its rulings on electoral reforms, the apex court had proposed a mechanism to follow up on the promises made by parties.

Quraishi said, "Legally, anything can be promised in the manifestos. However, the SC has said the promises should not be unreasonable. But it does raise ethical question, because the model code is all about ethics. It's not law, its foundation is ethics."

On the importance of the timing of poll promises, he recalled that the central government had approached the poll panel to announce minimum support price for crops when the model code was in place for Punjab elections.

He said the commission found that the MSP, which the Centre was planning to announce in February, was usually announced in April.

"We said what can wait should wait," he added.

Union Finance Minister Nirmala Sitharaman on Thursday released the BJP manifesto for the Bihar assembly polls which promised free COVID-19 vaccine once it has been cleared by the ICMR.

Opposition parties slammed the BJP for promising free COVID-19 vaccines in its Bihar poll manifesto and demanded action by the Election Commission, while alleging that the ruling party was using the pandemic for political gains.

The Rashtriya Janata Dal, the Congress, the Shiv Sena, the Samajwadi Party and the National Conference raised questions on the BJP's poll promise of free vaccine for Bihar, alleging that it is politicising the matter.

The results will be announced on November 10. 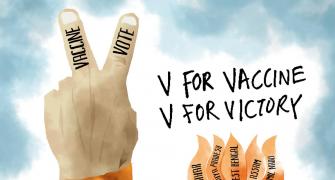 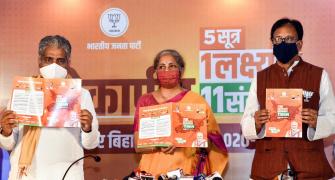