BJP's Bagga gets HC cover, no coercive action to be taken till July 6

In a reprieve for Bharatiya Janata Party leader Tajinder Pal Singh Bagga, the Punjab and Haryana high court on Tuesday ordered the continuation of the interim protection against arrest granted to him till July 6 in a case of allegedly making provocative statements, promoting enmity and criminal intimidation. 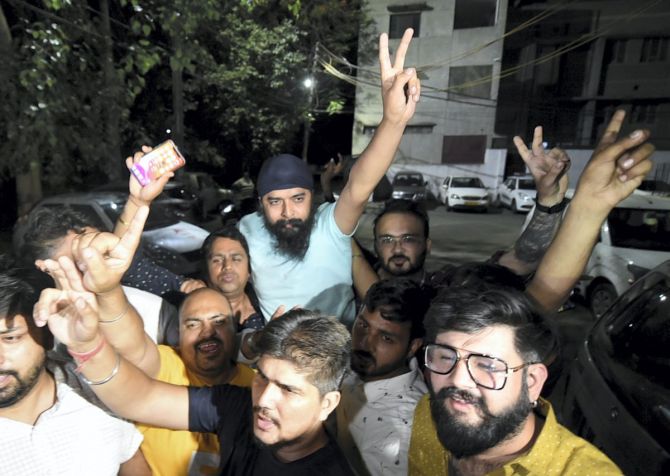 The matter came up for hearing before the bench of Justice Anoop Chitkara.

In its order, the court said, "Punjab's advocate general has submitted that they need to place on record additional documents and in the meantime, assures that the arrest warrants against the petitioner (Bagga) shall not be execute till the next date of hearing."

"Given the concessions made by the learned advocate general, the warrants of arrest issued against the petitioner by the court concerned (in Mohali) in the present FIR shall not be executed till the next date of hearing. Furthermore, no coercive steps shall be taken against the petitioner till the next date of hearing," it said.

On Tuesday, the court took up Bagga's petition, in which he has sought quashing of the FIR lodged against him last month. A Mohali court issued the arrests warrants against the BJP leader on Saturday.

The court did not grant any stay on the investigation in connection with the FIR against Bagga.

However, it made it clear that if the Punjab police wants to interrogate the BJP leader, it shall do so at his place of residence in Delhi and that too, only twice before the next date of hearing in the case.

"The petitioner shall be interrogated only for an hour each time between 10 am and 5 pm in the presence of his counsel. The investigation team shall not consist of more than three persons and it shall be led by an officer not below the rank of an IPS officer," the court said.

The judge ordered that no chargesheet shall be filed in the matter by the Punjab Police till the next date of hearing, Additional Solicitor General Satya Pal Jain, who appeared in the court on behalf of the Delhi police, said after the proceedings.

Senior advocate Chetan Mittal, who is representing Bagga in the case, said it was submitted before the court that they suspect the Punjab police will take another step against the petitioner and thus, his arrest and the investigation must be stayed completely.

Talking to reporters after the hearing, senior advocate Puneet Bali, Punjab's counsel in the case, said, "Unfortunately, the police of two states got him (Bagga) released from our legal custody, which is a serious issue. We want that the high court should hear our arguments and give its findings."

"Secondly, he (Bagga) has been told to join the investigation," Bali added.

In this petition, the court allowed Punjab's plea to implead the Centre and the Delhi police as the respondents in the case.

The case will now come up for final hearing on July 6.

On Saturday, the high court had directed that no coercive step be taken against Bagga after he sought a stay on the arrest warrants issued against him by the Mohali court.

The Punjab police had booked Bagga on charges of making provocative statements, promoting enmity and criminal intimidation. The case was registered on a complaint from Aam Aadmi Party leader Sunny Ahluwalia, a Mohali resident.

The FIR registered on April 1 referred to Bagga's remarks made on March 30 while taking part in a BJP youth wing protest outside the residence of Delhi chief minister and AAP national convenor Arvind Kejriwal.

Bagga was arrested by the Punjab police from his Delhi residence on Friday, stopped in Haryana while being taken to Punjab and brought back to the national capital by the Delhi police hours later, after the BJP leader's family filed a case of abduction after his arrest.

The case found the Punjab Police pitted against its counterparts in Haryana and Delhi.