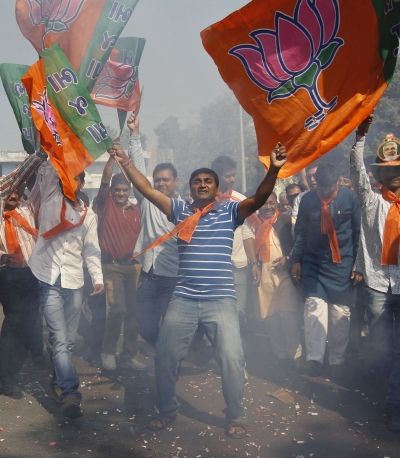 The Bharatiya Janata Party on Sunday handed a 4-0 drubbing to the Congress in the assembly polls by scoring landslide victories in Rajasthan and Madhya Pradesh and managing to retain power in Chhattisgarh.

The party is also close to forming a government in Delhi, after winning 31 seats in the 70-member assembly.

The election results also saw debutant Aam Aadmi Party putting up a stunning performance in Delhi, where its chief Arvind Kejriwal emerged as the giant killer by defeating three-time Chief Minister Sheila Dikshit by a huge margin. While the AAP's performance helped in the complete rout of the Congress, it halted BJP's march towards a majority.

Propelled by the aggressive campaign of its prime ministerial candidate Narendra Modi, BJP wrested power from the Congress in Rajasthan by scoring a three-fourth majority and retained power in Madhya Pradesh, where it increased its tally to reach two-third majority.

It was a hat-trick for the BJP in Madhya Pradesh, where Chief Minister Shivraj Singh Chouhan led the party to a spectacular tally of 165 seats in the 230-member assembly, 22 seats more than last time.

The Congress suffered a huge defeat with its tally coming down to 58 from 71 seats. The Bahujan Samaj Party got four seats.

In Rajasthan, Vasundhara Raje spearheaded the saffron surge, ousting the Congress, which registered its worst-ever performance. The BJP got 162 seats, its highest ever tally, in the 200-member assembly, leaving the Congress with only 21 seats. In the outgoing assembly, BJP had 78 seats and the Congress had 96 seats.

Of the four states, national capital Delhi returned a hung verdict, in which the BJP emerged the single largest party with 31 seats in the 70-member house. Its pre-poll ally Akali Dal won one seat, giving it a boost in the stakes for power.

The fledgling Aam Aadmi Party, formed just a little over a year ago, put up an impressive show, bagging 28 seats.

The ruling Congress, which was seeking a fourth consecutive term, was decimated, with its tally reduced from 43 in the outgoing house to eight. A number of heavyweights of the Congress and the BJP, including four ministers, were defeated.

Chhattisgarh, meanwhile, witnessed a day-long see-saw political battle. Finally, the BJP crossed the majority mark of 45 in the 90-member assembly and neded up winning 49 seats.

Like Modi in Gujarat, Chief Minister Raman Singh has scored a hat-trick.

Unlike in the other three states, the Congress put up a stiff battle in the state, helped by the sympathy wave in Bastar region, where Maoists had eliminated its top leadership in a dastardly attack earlier this year.

The Congress got 39 seats. The BJP had won 50 seats in the last state polls while the Congress had won 38 seats.