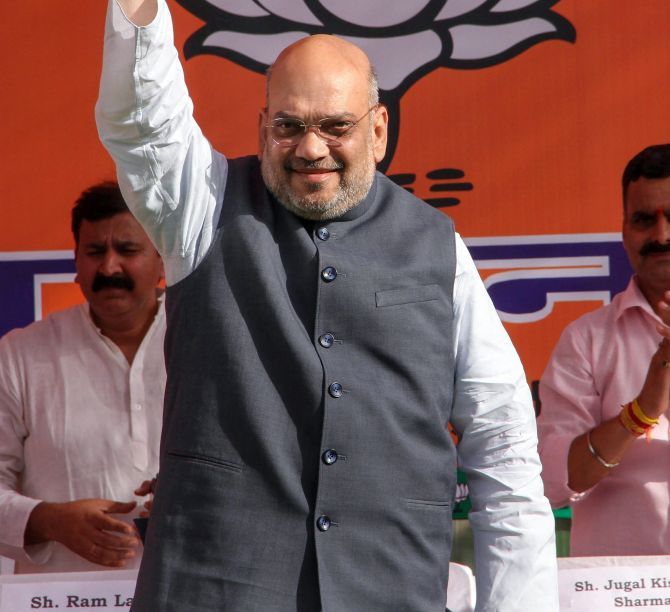 Bharatiya Janata Party president Amit Shah on Saturday said his party will never allow the separation of Jammu and Kashmir from the rest of the country, as he lashed at Congress leaders Ghulam Nabi Azad and Saifuddin Soz for being on the “same frequency” as the terrorists.

"Mr Soz, you can take hundreds of births but the BJP will not allow Kashmir to be disintegrated from India,” Shah said at rally in Jammu on his first visit to the state after his party pulled out of the coalition with the People's Democratic Party.

“Jammu and Kashmir is an integral part (of the country), and Syama Prasad Mookerjee has integrated it by laying down his life," he said at the public meeting held to mark the “martyrdom anniversary “of the Jana Sangh founder.

Former J&K chief minister Ghulam Nabi Azad recently said the security forces were killing more civilians than terrorists in the Valley and Soz in his forthcoming book reportedly endorses former Pakistan president Pervez Musharraf's assessment that Kashmiris will opt for independence if given a chance.

Shah said soon after Azad's remarks terrorist group Lashkar-e-Taiba came out with a statement supporting him.

“What kind of frequency matching is this between Lashkar-e-Taiba and the Congress,” he said, asking party president Rahul Gandhi to explain how Azad and the LeT shared views.

As Shah took potshots at the Congress, people shouted "death to traitors" slogans”.

He said Rahul Gandhi should tell both Azad and Soz to apologise to the people of the country. “I want to reassure people of J&K that nobody can disintegrate it from India," he said.

He said that after the BJP withdrew support to the PDP-led coalition government, leading to its collapse, the Congress "started showing its true colours" in anticipation of elections.

"Everyone feels that some day soon, elections will happen. While BJP raises slogans of 'Bharat mata ki jai', the Congress also started showing its true colours in anticipation of elections.

The BJP president called Syama Prasad Mookerjee an inspiration for the entire country, particularly the youth.

"Mookerjee started an agitation, set out for Jammu and Kashmir from Delhi and was arrested,” he said. Shah said he didn't agree that Mookerjee died a natural death, and believed that he was “assassinated in the jail in J&K”.

He said it was because of Mookerjee that the tricolour was unfurled in J&K and the state became an integral part of India.

He said all nationalists had a love for Jammu and Kashmir but for the BJP the connection was stronger, “because our founder gave his life for it”.

The BJP president said power held no meaning for the party.

Shah said if a government falls anywhere in the country, political parties express regret. But it is only the BJP which chants “Bharat mata” slogans when its government falls, he said.

The BJP chief was accorded a rousing reception with the party's youth wing taking out a motorcycle rally from the airport to the state guest house.