The Bharatiya Janata Party's recent victory in four states, strategy for the upcoming elections and successful completion of the Modi government's eight years are expected to be the highlights during the party's national executive meeting starting in Hyderabad on Saturday. 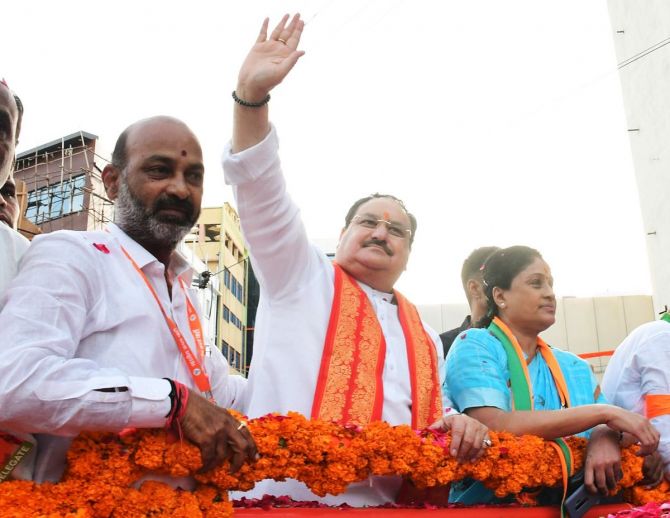 The BJP's frontal attack on the Telangana Rashtra Samiti and other 'corrupt and dynastic' parties is likely to feature prominently during the proceedings.

The meeting starts a day after the Supreme Court's scathing criticism of the BJP's now suspended spokesperson Nupur Sharma for her controversial remarks against Prophet Muhammad and in the aftermath of the protests against Agnipath, a short-term recruitment scheme in the armed forces.

It will be keenly watched if the BJP top brass speaks on these two issues, which have put the party on the defensive, especially the row involving Sharma as it has drawn India criticism from several Islamic countries.

The two-day meeting will begin with BJP president J P Nadda's speech and at least two resolutions, including a political resolution, will be passed during the proceedings.

The nomination of Droupadi Murmu as the BJP-led National Democratic Alliance's Presidential nominee may also feature during the meeting, as the BJP can claim to have continuously been working towards empowering the downtrodden sections of the society.

The meeting will end with Prime Minister Narendra Modi's concluding remarks, where he will the set agenda for the party's activities in the coming weeks and months.

With Maharashtra now in its kitty, the BJP has consolidated its position in the north-western region and has now set it eyes on the southern states, especially Telangana.

This is the BJP's third meeting in South, after Bengaluru and Kozhikode, since the party come to power in 2014.