The Bharatiya Janata Party and its National Democratic Alliance partners -- the Janata Dal-United and Lok Janshakti Party -- on Monday formally announced their alliance for the Delhi assembly polls, asserting that it will send a "strong" political message across the country. 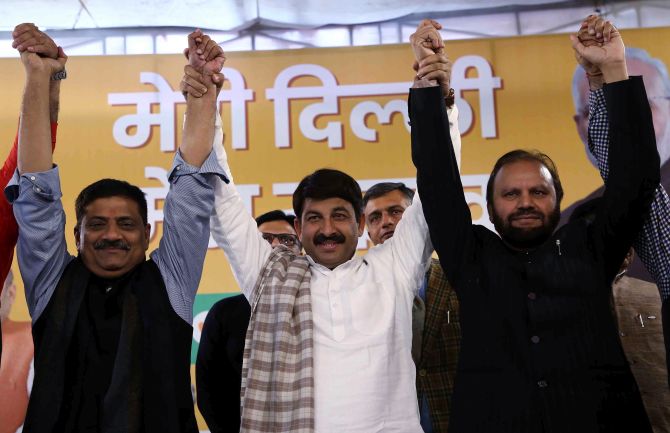 IMAGE: Delhi BJP president Manoj Tiwari (centre) along with leaders of the JD-U and LJP during the announcement of the alliance for Delhi assembly elections in New Delhi on January 21, 2020. Photograph: ANI Photo.

The BJP is contesting 67 of the 70 assembly seats, while LJP and JD-U will contest one and two seats respectively.

However, the Shiromani Akali Dal, oldest ally of the BJP, has refused to contest the February 8 polls in alliance with the saffron party, citing differences over the Citizenship Amendment Act (CAA).

Addressing a joint press conference, Delhi BJP president Manoj Tiwari said that was the first time that the NDA partners were contesting Delhi elections together.

"This alliance has created an enthusiasm in Delhi which has never been seen before. The JD-U and LJP, having their base in Bihar, will support the BJP candidates in 67 seats of Delhi," he said.

Janata Dal-U candidate Shailender Kumar has been fielded from Burari constituency while SCL Gupta will fight from Sangam Vihar seat on the party ticket.

He said the two party candidates will contest the polls on the JD-U’s symbol.

"The alliance has send out a strong message in the country. It will become even more visible in the coming elections," Jha said.

Bihar Chief Minister and JD-U president Nitish Kumar and other party leaders will campaign in Delhi, he said.

LJP patriarch and Union minister Ram Vilas Paswan and party president Chirag Paswan, along with other leaders, will also campaign in the polls, said national spokesperson of the party AK Bajpai.

"This alliance sends a strong message in the country that the BJP is pursuing Gahtbandhan Dharma (alliance ethics) and it will script the story of success in future," Bajpai said.

Polling will be held in Delhi on February 8 and the results will be declared on February 11.