The Bharatiya Janata Party on Tuesday stood firm behind noted lawyer Ram Jethmalani, its Rajya Sabha candidate from Rajasthan, and denied it was holding up its MLAs in a resort to ensure they do not indulge in cross-voting in the polls.

"Ram Jethmalani is our official candidate. This was a collective decision taken by our party president Nitin Gadkari after consultations with the central and the Rajasthan party units. The final word came from the Parliamentary Board. We don't expect any problems at all," BJP spokesperson Nirmala Sitaraman said.

She was replying to a question on whether the BJP was convinced that Jethmalani would win the Rajya Sabha poll as its candidate from Rajasthan.

When asked why BJP MLAs were being kept together in a resort before the polling, Sitaraman said, "This is a procedural thing that they are being hosted in one place. It is a common thing to do so. There is nothing more to read into this. Jethmalani will continue to be our candidate."

There are 13 Independents, of which 10 have been supporting the Congress. Each candidate requires 41 first preference votes to win the seat.

The BJP, which has 79 MLAs, is sure of the success of one of its two candidates--VP Singh and Jethmalani--a founding member who returned to the party only to contest the poll. It needs three more votes.

JD(U) MLA Fateh Singh has also expressed support to the BJP in the election as the two parties are in alliance. At least 67 BJP MLAs have been put up in the hotel where 87-year-old Jethmalani was interacting with the MLAs, seeking their votes.

With every vote counting, both the sides have stepped up their efforts to woo members. The decision of CPI(M) which has three MLAs to abstain from voting has added uncertainty in the contest. 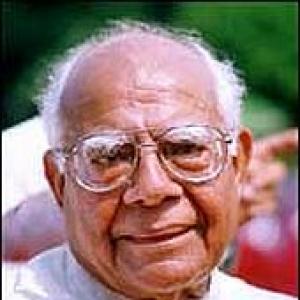