The Congress on Thursday expressed concern over the Bharatiya Janata Party's alleged attempt to polarise society and inflame communal divisions, with Sonia Gandhi accusing it of spreading the virus of hatred, causing "grave damage" to social harmony. The Congress held a marathon meeting of its working committee in which it suggested utilisation of the remaining period of lockdown to prepare and publish a detailed 'exit strategy' and a comprehensive 'road-map' for the future.

Top Congress leaders met through videoconferencing for almost four hours and suggested measures to substantially ramp up health infrastructure to deal with the COVID-19 pandemic and revive the economy and protect employment and wages/incomes.

"The CWC notes with concern that the BJP is seeking to inflame communal divisions even as the entire nation battles Covid-19. The virus does not discriminate on the basis of caste, creed, religion or gender.

"As a nation, we must be wary of forces that seek to polarise in times of crisis such as these. The onus lies on us to ensure that we stand together as one nation in the face of all odds," the party said in a unanimous resolution.

The CWC also hoped the government will consider its suggestions in the constructive spirit to help the country and the people emerge victorious in this battle.

Addressing the meeting, Congress chief Sonia Gandhi alleged the BJP's attempt to create communal polarisation should worry every Indian and her party will have to work hard to repair the 'damage'.

"Let me also share with you something that should worry each and every one of us as Indians. When we should be tackling the coronavirus unitedly, the BJP continues to spread the virus of communal prejudice and hatred," she said.

"Grave damage is being done to our social harmony. Our party, we will have to work hard to repair that damage," the Congress chief added.

This is the second time the CWC, the Congress's top decision-making body, is meeting through videoconferencing in the three weeks.

Former prime minister Manmohan said the success of the lockdown will be judged finally on India's ability to tackle COVID-19. He also said the cooperation between the Centre and states was key to success of the country's fight against coronavirus and it would very much depend on the availability of resources.

Party leader Rahul Gandhi said issues of migrant workers must be addressed on priority and lockdown beyond May 3 should only be continued in COVID hotspots, not green zones.

"Issue of migrant workers needs to be addressed as a first priority. Lockdown is a mere pause button," he said.

"As a nation, we need to think of a transition from a (complete) lockdown to lockdown only in disease hotspot zones and commencement of activities in the green zones."

Priyanka Gandhi Vadra demanded that migrant workers stuck at various state borders due to the the lockdown be permitted to return home after due testing and precautions.

"Compassion is the key to fight Covid-19 and not hostility towards the victim of corona," she said, addressing the CWC.

At a press conference, AICC general secretary K C Venugopal said the CWC strongly recommended a complete loan moratorium on agricultural and other loans for a period of at least one year along with complete interest subvention.

Congress chief spokesperson Randeep Surjewala said it is tragic that the country is still lagging behind in establishing a robust and accurate testing regime.

"Testing, Tracing, Quarantine and Treatment are crucial to containing the disease," he said reading out the CWC resolution.

Surjewala said the CWC laid down a detailed road map for testing, tracing and quarantine.The CWC also pointed out the issue of Indians stranded abroad, he said.

He said the Congress has pointed out that the coronavirus economic task force headed by fnance minister has done zilch in terms of a solid relief package. "We sincerely hope that the government listen to the resolution of the CWC and act & react accordingly".

Sonia Gandhi noted coronavirus cases have increased disturbingly in the past three weeks and urged government to scale up testing.

Referring to several letters written to the PM, she said, "Unfortunately, they have been acted upon only partially and in a miserly way. The compassion, large-heartedness and alacrity that should be forthcoming from the central government is conspicuous by its absence."

She claimed that around 12 crore people lost jobs in the first phase of the lockdown and urged the government to provide a relief package for the MSME sector.

Gandhi called upon the government to provide food and financial security to migrant and jobless workers stranded at various places.

"We have repeatedly urged PM there is no alternative to testing, tracing and quarantine. Unfortunately, testing still remains low, testing kits still in short supply," she noted.

Gandhi said trade, commerce and industry have come to a virtual halt and crores of livelihoods have been destroyed.

"The central government does not appear to have a clear idea on how the situation will be managed after May 3. A lockdown of the present nature after that date would be even more devastating," she said.

Congress-ruled chief ministers hit out at the Centre for not providing financial aid.

"Unless there is a big financial package for states, how will normalcy return to states post-lockdown," said Ashok Gehlot.

"How will states survive in times of crisis. We are not enemies but have to act and work together," said Puducherry CM V Narayanasamy. 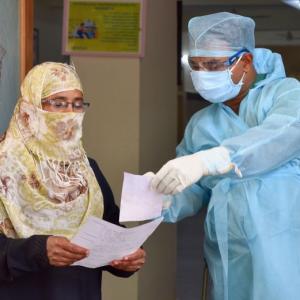