Ruling Bharatiya Janata Party on Tuesday sprang a surprise and was on set to emerge as the single largest party in Uttarakhand bagging 20 seats and leading in 12 more, notching a wafer-thin lead over rival Congress.

Out of the 42 seats whose results were declared so far, BJP secured 20 seats while Congress won 17 seats, officials said. The state assembly has a total strength of 70.

In the projections in terms of lead given by the Election Commission, BJP is likely end up with a tally of 32 seats -- three short of half way mark -- against 31 of Congress.

Chief Minister Bhuvan Chand Khanduri, who led the "Khanduri hain zaroori" campaign of BJP, trailed by 4,718 votes against S S Negi of Congress from Kotdwar seat in the last rounds of counting.

BJP bagged seats in Sitarganj, Nanakmatta and other places while Congress so won from Haldwani and Almora constituencies.

The trends suggested BJP and Congress were in close fight which might throw a hung assembly. BJP opened its account from Sitarganj seat in Kumaon region when its candidate Kiran Chand Mandal bagged the seat. 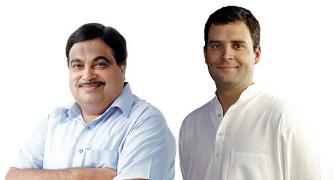