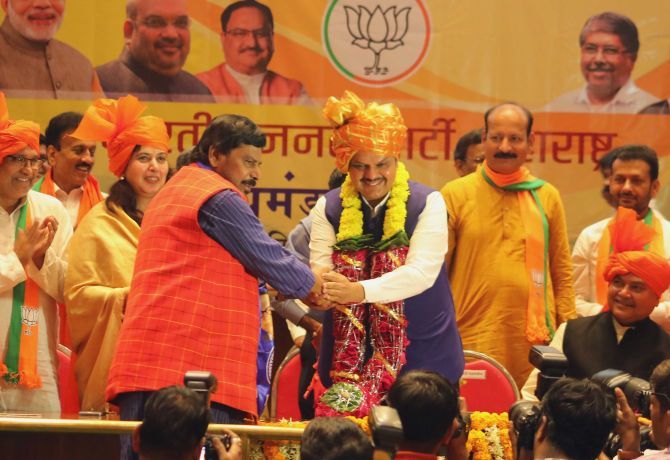 IMAGE: Maharashtra Chief Minister Devendra Fadnavis being greeted by Union minister and his alliance partner Ramdas Athawale during a meeting of BJP MLAs in Mumbai on Wednesday. Photograph: Sahil Salvi

Amid the ongoing tussle between the Bharatiya Janata Party and Shiv Sena over power sharing in Maharashtra, Chief Minister Devendra Fadnavis on Wednesday asserted that the alliance partners will soon form government in the state.

He dubbed the rumours of 'alternate formulae' being worked out to form the state government as 'entertainment'.

Fadnavis was on Wednesday re-elected leader of the state BJP legislature party, amid demand by ally Shiv Sena for the chief minister's post on rotational basis.

"The mandate of voters of Maharashtra is for the 'Mahayuti' (BJP-Sena alliance). Hence the 'Mahayuti' is going to form its government soon in the state," Fadnavis said while addressing the newly-elected BJP MLAs at the state legislature party meeting.

"Though there are several rumours floating around in the state about alternate formulae being worked out to form the government, it is more of an entertainment," he said.

Fadnavis pointed out that after 1995, no party in the state won more than 75 seats in polls to the 288-member assembly, but the BJP bagged 122 seats in 2014 and 105 in the just concluded elections.

While moving the motion to elect Fadnavis as leader of the House, BJP state president Chandrakant Patil said, "In the last five years, no faction in the BJP ever went to Delhi and requested to replace Fadnavis."

"There were protests and agitations (in the state) in last five years, but no one said Fadnavis should resign. This indicates his skills and acceptability across the state,"
Patil said.

Ever since results of the October 21 assembly polls were out, Shiv Sena president Thackeray has been claiming that the 50:50 formula on sharing of power was 'agreed upon' between himself, BJP president Amit Shah and Fadnavis ahead of the Lok Sabha elections.