BJP says Jitin's inclusion will make it stronger in UP

Hours after Jitin Prasada switched from Congress to Bharatiya Janata Party, party spokesperson Gaurav Bhatia welcomed Prasada to the party asserting that his inclusion would make the BJP stronger in Uttar Pradesh. 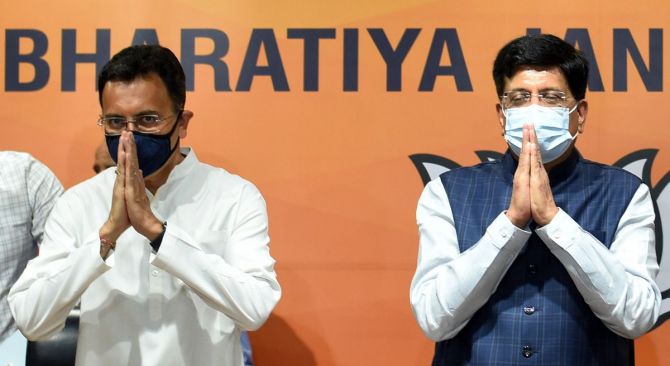 "The inclusion of Jitin Prasad ji in BJP will give strength to the party and we are sure that with his hard work, he will play a major role in the upcoming Uttar Pradesh elections and strengthen the party," Bhatia said.

The BJP spokesperson said, "The whole nation knows that, unlike in any other political party, a normal party worker in BJP can also dream and work hard to become the national president like Amit Shah and JP Nadda and can also hold the highest constitutional posts like Narendra Modi Ji."

Taking a jibe at the Congress, the BJP leader said, "It a ship which does not know which direction to go. Only one family is being heard there. Because of nepotism and corruption, Congress is not on the scene in the upcoming Uttar Pradesh elections.

"The other parties in the state are not attached to the common people. BJP is the only option in the state."

"BJP is confident that it will form the government in Uttar Pradesh under the leadership of Yogi Adityanath in the upcoming election with a majority," he added.

Earlier in the day, Prasada, former MP from Uttar Pradesh's Dhaurahra, joined the BJP in the presence of Union Railway Minister Piyush Goyal at the party headquarters.

This comes ahead of the all-important Uttar Pradesh Assembly elections the next year.

Speaking on the occasion, Prasada said, "I have a three-generation connection with Congress, so I took this important decision after a lot of deliberation.

"In the last 8-10 years I have felt that if there is one party that is truly national, it is BJP. Other parties are regional but this is the national party."

Prasada started his career with Indian Youth Congress as a general secretary. He was elected to the Lok Sabha in 2004 for the first time. He was also a minister in the UPA government at the Centre.

Prasada's departure is a fresh blow to the Congress party after another heavyweight leader of the party Jyotiraditya Scindia had joined the BJP in March 2020.