Source: PTI
June 05, 2012 15:49 IST
In signs of growing dissent within the Bharatiya Janata Party, hoardings supporting party leader Sanjay Joshi have came up at various places in the city, targeting Gujarat Chief Minister Narendra Modi ahead of the state elections scheduled in December this year.

The hoardings apparently targeted the Gujarat chief minister though his name has not been written any where on them. They say that those having a narrow mind cannot become a big leader.

Modi had reportedly threatened to quit the national executive himself if Joshi was allowed to continue as its member.

The BJP central leadership had then asked Joshi to resign from the national executive following which Modi went to Mumbai to attend the event last month.

The Gujarat BJP unit has so far refused to say anything on the hoardings of Joshi.

Modi and Joshi started their political careers as comrades to put Gujarat BJP unit on a high pedestal but now they don't see eye to eye. Joshi came to Ahmedabad in 1988-89 from Maharashtra Rashtriya Swayamsevak Sangh to join the BJP in Ahmedabad.

In 1990, Modi was the general secretary of the state unit of the BJP while Joshi was the secretary and both worked together for about five years along with other leaders, which was the crucial phase of state BJP when the party came to power for the first time in the state with Keshubhai Patel as chief minister in 1995.

However, in 1995 itself after a revolt by then party leader Shankarsinh Vaghela, Modi was shunted out of the state and Joshi became the powerful general secretary (organisation) of BJP state unit.

The BJP was able to come back to power in Gujarat after a revolt by Shankarsinh Vaghela in 1998.

The enmity between the two began in 1998, when Modi wanted to return to the state but Joshi had opposed the move and did not allow him to return, sources said.

Keshubhai Patel once again became the chief minister of Gujarat in 1998. The rivalry of Joshi-Modi grew from that year and it became more intense when Patel was unceremoniously removed as the chief minister and replaced by Modi in 2001. But, the party then transferred Joshi to Delhi and gave him a powerful post of Party General Secretary (organisation).

In the next few years, the clout of Joshi began to grow at the national level due to his position in the party. However, in 2005, Joshi was forced to resign following a controversy over a CD purportedly showing him in poor light.

The CD surfaced during the silver jubilee celebrations of the party in Mumbai.

Source: PTI© Copyright 2022 PTI. All rights reserved. Republication or redistribution of PTI content, including by framing or similar means, is expressly prohibited without the prior written consent.
Related News: Gujarat BJP, Bharatiya Janata Party, Narendra Modi, Joshi, Keshubhai Patel
Print this article
Modi and Joshi: Comrades who turned foes
Why Modi must be stopped in his tracks 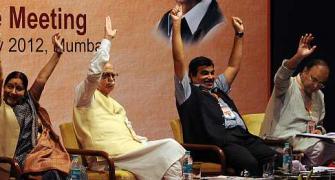 Why BJP has not emerged as a national alternative to Cong 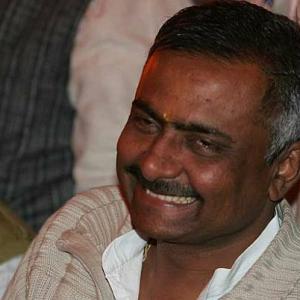