BJP leader Priyanka Tibrewal, whom the party has nominated to contest against West Bengal Chief Minister Mamata Banerjee in the September 30 by-poll to the Bhabanipur seat, said on Friday highlighting the torture and violence' unleashed by the Trinamool Congress after the assembly polls will be a key issue in the election. 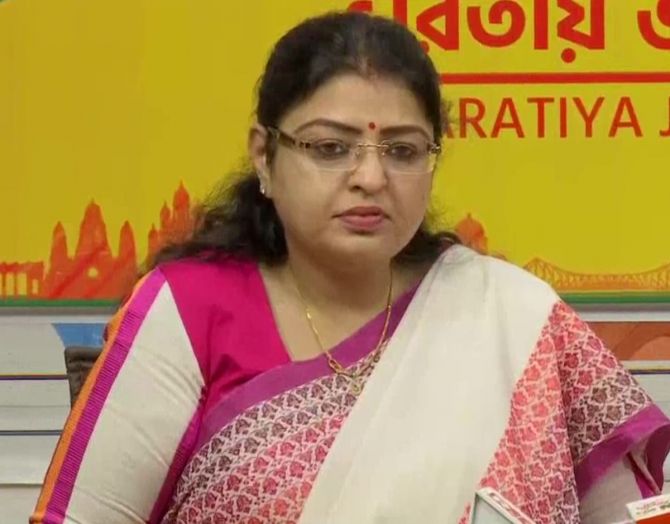 Tibrewal, a lawyer, is one of the petitioners in the post-poll violence cases against the TMC government in the Calcutta high court.

The party also announced the names of Milan Ghosh and Sujit Das for Samserganj and Jangipur seats respectively.

The votes will be counted on October 3 and results declared the same day.

'She (Mamata Banerjee) has already lost from Nandigram. Now she is fighting this election to save the chief minister's chair. My task will be to reach out to the people of the constituency and inform them about the atrocities, the torture and violence that her party unleashed on opposition workers after the assembly polls. I am confident that people of Bhabanipur will vote for me and defeat her,' she asserted.

She had her first brush with electoral politics in 2015, when she contested the Kolkata Municipal Corporation election and lost.

She contested the 2021 assembly polls from the Entally seat and lost again to a TMC candidate by a staggering margin of more than 58,000 votes.

Yet, BJP sources said, she was chosen to lock horns with a redoubtable Mamata Banerjee because of her 'fighting spirit' and also as not many leaders were ready to contest.

Tibrewal, they said, has become a known face, particularly after she filed cases against the TMC government over post-election violence across the state.

'We approached some BJP leaders but many refused to contest. Priyanka Tibrewal is a fearless leader, very hard working, and an excellent taskmaster. She is a very good orator. We are confident that she will win the seat by defeating Mamata Banerjee,' West Bengal BJP president Dilip Ghosh said.

Senior TMC leader and Minister Firhad Hakim said the BJP candidate will lose her deposit and Banerjee will win by a record margin.

The bypoll to Bhabanipur was necessitated after Sovandeb Chattopadhyay, a cabinet minister, vacated the seat to facilitate Banerjee's return to the state assembly following her defeat in Nandigram.

Chattopadhyay had won the seat by a margin of more than 28,000 votes.