The Bharatiya Janata Party and the Nishad Party will contest the upcoming assembly polls together in Uttar Pradesh and will work towards forming the next government in the state, Union minister Dharmendra Pradhan said on Friday. 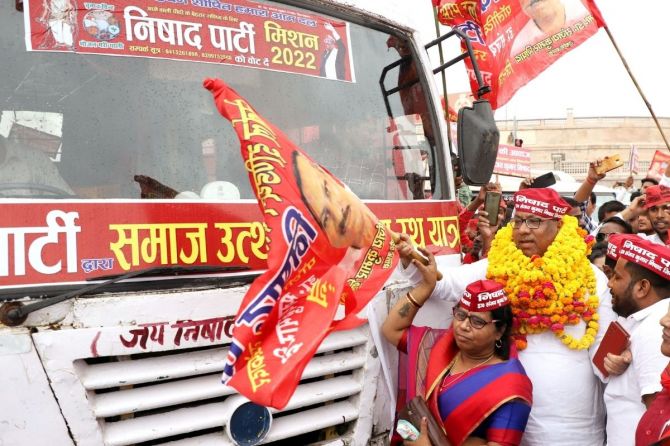 Pradhan, who is the BJP's in-charge of Uttar Pradesh polls, made a formal announcement of the alliance at a press conference in Lucknow in the presence of the Nishad Party, or the Nirbal Indian Shoshit Hamara Aam Dal, chief Sanjay Nishad.

"We will have an alliance with the Nishad Party. We (BJP-Nishad Party) will fight the 2022 Uttar Pradesh assembly elections together with strength, and today the leaders of both the parties are making a formal announcement about it," Pradhan said.

"Not just the Nishad Party, we also have an alliance with the Apna Dal and we will work together to form the government in the state," he added.

Replying to a question, Pradhan said the upcoming state elections will be fought under the leadership of Prime Minister Narendra Modi and Chief Minister Yogi Adityanath.

Recently, Sanjay Nishad was in the news for his demand that the BJP should project him as a deputy chief minister face in the elections. He claimed that the Nishads (fishermen) constitute nearly 18 percent of total votes and play a deciding role on 160 assembly seats.

Nishad, who had been putting conditions for an alliance with the BJP, however, did not answer questions of media persons during the press conference on Friday.

Asked about conditions of the alliance, Pradhan said that talks have been held on all issues and it will be made public at an 'appropriate time.'

The Nishad Party had contested the 2017 assembly elections in alliance with the Peace Party led by Dr Ayub and contested 72 seats. Its candidate Vijay Mishra had won from Gyanpur in Bhadohi district.

In the 2019 Lok Sabha polls, the party entered into an alliance with the BJP and Sanjay Nishad's son Praveen Nishad was nominated from Sant Kabir Nagar wherefrom he won the elections.

Recently, a news channel had done a sting operation on Sanjay Nishad wherein he purportedly claimed that he sells party tickets in the elections. However, he had termed the episode as a conspiracy against him.

When Pradhan was asked about the sting operation, he remarked, "Even after that we have met (aligned)."

About Modi and Adityanath, he said people in the state have unwavering faith in them. Faith is most important in a democracy, he added.

"The prime minister has given a call for sabka saath, sabka vikas and sabka vishwas," Pradhan said.

When asked as to why the BJP, which claims to be the world's largest party, was nurturing caste satraps, he said in the 2022 elections, the saffron party will be able to connect deeply with people from other societies as well.

The BJP has brought many political powers together and has started the process of taking it forward, he said.

Pradhan claimed that the BJP has really benefited from farmers and is committed to doubling their income.