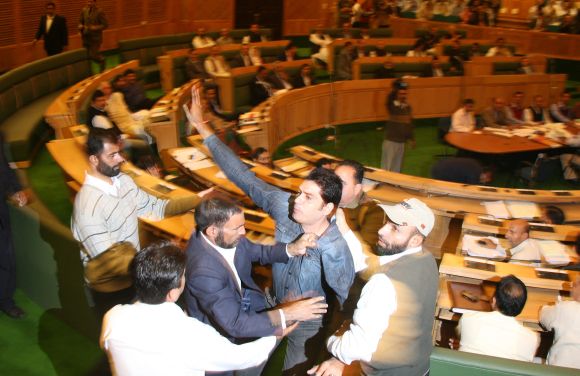 As the 12th assembly came in form on Tuesday, Bharatiya Janata Party Member of Legislative Assembly Ravinder Raina triggered a controversy when he took the name of Mata Vaishno Devi while taking oath as MLA in the name of God, drawing objections from the opposition.

Communist Party of India-Marxist MLA M Y Tarigami objected to him first and said there is a prescribed format for taking oath in the name of God (Ishwar).

However, Protem Speaker Mohmmad Shafi intervened asking Raina to take oath in the name of God. Raina tried to convince opposition members and said "I am a worshipper of Ma Vaishnodevi and consider her as my Ishwar".

"If I am doing that it will be true respect to my Ishwar," he added. His statement drew clappings from the people sitting in the visitors gallery on the stand of Raina, raising objection from opposition NC benches.

They said that it is not the meeting of a political party and the member needs to advise his supporters to take the proceedings of the house seriously. Later, after the intervention of the Deputy Chief Minister Nirmal Singh, Raina took oath in Hindi in the name of Ishwar.

Raina before joining BJP has been a Rashtriya Swayamsevak Sangh worker after resigning as commissioned officer from Indian Navy. On coming out of the assembly complex, Raina unfurled a tricolour and started chanting with his supporters 'Bharat Mata Ki Jai...Jai Mata Jai-- Bharat Mata Ki Jai'.

All BJP legislators, except Deputy Chief Minister Nirmal Singh, came to the House wearing Dogra turbans. Before coming to the assembly, they garlanded the statue of late Maharaja Hari Singh, the last Dogra ruler of the state, and Prem Nath Dogra as a matter of respect.