Bharatiya Janata Party MLA Surendra Singh has alleged that violence during the farmers' tractors parade in the national capital had taken place on the directions of Congress president Sonia Gandhi and Rahul Gandhi, and demanded that a case of sedition be lodged against those involved in the violence. 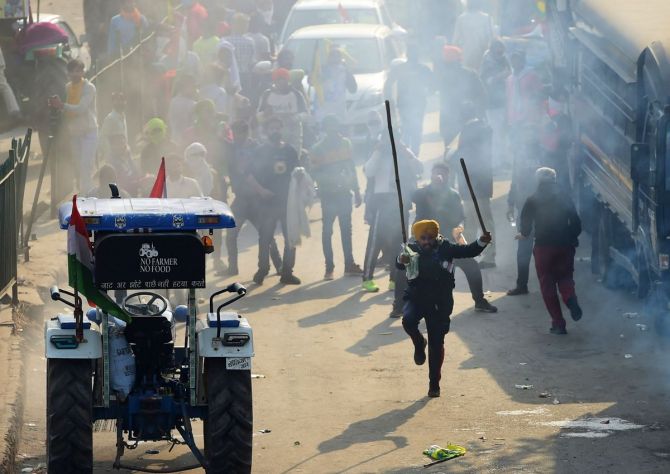 Hitting back, Uttar Pradesh Congress media coordinator Lalan Kumar charged that the BJP government was responsible for the violence and said the BJP MLA's statement shows his "mental bankruptcy".

The tractor parade on Tuesday that was to highlight the demands of the farmer unions to repeal three new agri laws dissolved into anarchy on the streets of the national capital as tens of thousands of protesters broke through barriers, fought with police, overturned vehicles and hoisted a religious flag from the ramparts of the iconic Red Fort.

Speaking with reporters on Tuesday night, the BJP MLA said, "The act of violence during tractor parade is condemnable. A case of sedition should be lodged and strict action should be taken against those involved in the act".

Asking the party leadership to take strict action against those involved, Singh alleged, "There is foreign hand behind the violence. The incident had taken place on directions of Congress president Sonia Gandhi and Rahul Gandhi. Congress leaders not expressing any regret over the incident proves that."

Reacting strongly to the allegation, Kumar charged "The BJP government, home ministry, police and intelligence agencies were responsible for whatever happened during the tractor parade".

"For bringing bad name to the agitation some persons intruded in the guise of farmers. Deep Sidhu is an example. Sidhu was representative of BJP MP Sunny Deol... BJP should tell how Sidhu is related with it and what punishment will he be getting for whatever he did at Red Fort," Kumar said.

Deol has said he has no link with Sidhu.

Expressing anguish over the violence in the national capital during the farmers' tractor parade, the Congress had said on Tuesday that there is no place for such incidents in a democracy, even as it urged Prime Minister Narendra Modi to "shun arrogance" and repeal the three farm laws.

UP Minister for Backward Welfare, Anil Rajbhar had said on Tuesday that "those protesting in Delhi are not farmers but middlemen-type people, who stand exposed after the incident."

"The work of farmers is not to protest on roads with their tractors. They always work in their fields. They are protesting laws passed in Parliament," he added.