In remarks laced with sarcasm, the Sena said while no importance is given to veteran BJP leaders, their ashes are treated with importance. The Shiv Sena on Monday accused the Bharatiya Janata Party of giving a 'political colour' to the ritual of immersion of former Prime Minister Atal Bihari Vajpayee's ashes, saying the 'staged' affection made the great leader look small after his death.

After the 93-year-old leader's death on August 16, the BJP had decided to immerse his ashes in various rivers across the country.

In remarks laced with sarcasm, the Sena said while no importance is given to veteran BJP leaders, their ashes are treated with importance.

A true obituary to a person is to carry forward his thoughts, instead of projecting a 'staged' affection towards him, it said in an editorial in party mouthpiece Saamana.

'The vacuum created after Vajpayee's death is being attempted to be filled in (by some) with ridiculous and unsuitable ways. There is no importance given to veterans in the BJP but their ashes are treated with importance,' it said.

Vajpayee had a pan-India appeal and senior leaders of various political parties were present at his last rites because he was great in all ways, it noted.

'But there have been attempts to make him look small after his death,' the Uddhav Thackeray-led party said.

Instead of the ashes immersion ritual being performed by one party, it should have been carried out as a national event involving all parties, it said.

'The parties would have accepted the urns and immersed the ashes with honour. Mamata (Banerjee) from West Bengal, the Shiv Sena from Maharashtra, Navinbabu (Patnaik) from Odisha and the Akali Dal in Punjab could have been taken along (in the ritual),' the editorial opined.

'Congress president Rahul Gandhi would have participated in it and the world could have seen Atalji's greatness and popularity,' it said.

'Jawaharlal Nehru (country's first prime minister) and Atal Bihari Vajpayee were leaders beyond political boundaries. But giving political colour to his ashes immersion is not a good thing,' the Marathi daily said.

It said the seriousness with which Vajpayee's ashes should have been carried and immersed, was missing. Except one or two instances, the ritual of immersion of his ashes was like a 'political event', it said.

Some even raised the urn containing Vajpayee's ashes as if it was a victory trophy. Some (BJP) ministers and party officials had the expression of winning a world cup trophy, it quipped.

'How can people hoot with laughter with the urn of Atalji's ashes? This has been captured by TV cameras. Some took selfies with his ashes. All this unmasked the staged affection towards Vajpayee,' said the Sena, which is an ally of the BJP at the Centre and in Maharashtra.

The Sena said that after the Gujarat riots in 2002, Vajpayee had asked the then state chief minister Narendra Modi to follow 'rajdharma' (principles of governance). 'There was the honesty of a politician behind it,' it said, adding that the country loved him like it had loved Nehru.

'No leader's greatness is decided by the last rites being performed with full state honours; it is a part of the protocol,' the Sena said.

It said Vajpayee's relatives felt that the wave of sorrow in the country after his death has been used for political gains.

'The more serious issue was the disturbing images of the immersion of his ashes. May it not happen to anyone else,' the Sena said. 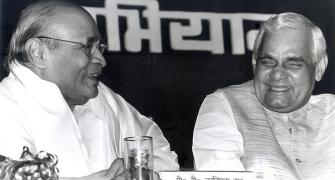 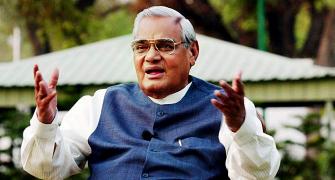 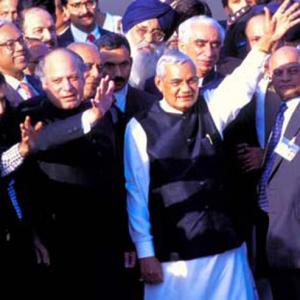