The Bharatiya Janata Party on Saturday named Union minister Narendra Singh Tomar and its general secretary Arun Singh as central observers for the election of the leader of its legislative party in Assam. 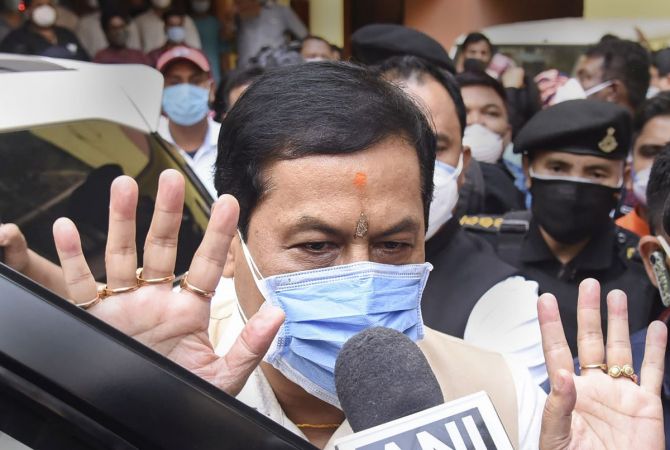 The legislative party meeting is expected to be held on Sunday, and the leader will be the next state chief minister as the BJP-headed alliance has won a majority in the state assembly polls.

The meeting is scheduled to begin from 11 am and Tomar and party Singh will be present as central observers.

Baijayant Panda, BJP's Assam in-charge will also be present on the occasion.

He, however, refused to divulge the details of the scheduled meeting.

The party's central leadership had summoned chief minister Sarbananda Sonowal and Health Minister Himanta Biswa Sarma, both contenders for the top post, to New Delhi on Saturday for discussions on the formation of the next government in the state.

A series of meetings, lasting for more than four hours, were held with BJP President J P Nadda and Union Home Minister Amit Shah with the duo, following which Sarma said that the BJP's legislature party is likely to meet on Sunday and all questions related to the next government will be answered there.

Both Sonowal and Sarma had gone together to Delhi on Saturday morning by a chartered flight and returned tonight along with the central observers.

The BJP had not announced the name of the chief minister before the polls and speculations are rife for the last one week on who would be the next chief minister of the state.

Sonowal was projected as the chief ministerial candidate during the 2016 polls and as the then state BJP President had led the party to victory, forming the first saffron party government in the North East.

Party sources said the name of the chief minister was expected to be proposed by either of the contenders with the party president likely to second it.

Of the 126 assembly seats in Assam, the ruling alliance has secured 75 seats with the BJP winning 60 while its alliance partners the Asom Gana Parishad got nine seats and United People's Party Liberal six.

Meanwhile, the BJP parliamentary board, the highest decision-making body of the party, appointed Union minister G Kishan Reddy the central observer for election of the leader of the BJP MLAs in the Tamil Nadu assembly.

For the meeting of its West Bengal MLAs to elect their leader, the BJP appointed Union minister Ravi Shankar Prasad and party general secretary Bhupender Yadav as central observers.