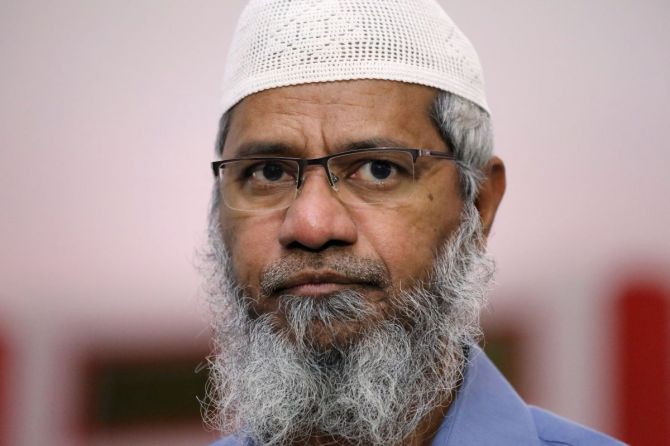 IMAGE: Zakir Naik during a prayer at a mosque in Melaka, Malaysia, in 2019. Photograph: Lim Huey Teng/Reuters

Naik, a televangelist, reportedly left India in 2016 and moved to Malaysia, where he was granted permanent residency.

India had sent a request to Malaysia for his extradition.

Rodrigues in a statement on Tuesday said, "Zakir Naik is a wanted man under the Indian law. He is charged with money laundering crimes and hate speeches."

"He is a terror sympathiser. In fact, he is no less than a terrorist himself. He has openly supported terrorist Osama Bin Laden and has been instrumental is spreading Islamic radicalism and hate in India," the BJP leader stated.

He appealed to the central government, Indian Football Associations, Indians in Qatar and those travelling to the host country to boycott the FIFA World Cup.

The FIFA World Cup is a global event. People from all over the world come to witness this spectacular sport and also millions watch it on the TV and Internet, he noted.

Rodrigues claimed that giving a platform to Naik at a time when the world is fighting global terrorism is to give a platform to a terrorist to spread his radicalism and hate.

"Not only people in India but people from other countries who are victims of terrorism must boycott the FIFA World Cup in solidarity with the global fight against terrorism," he added.

Naik is banned in the UK and Canada for his hate speech against other religions. He is among the 16 banned Islamic scholars in Malaysia.