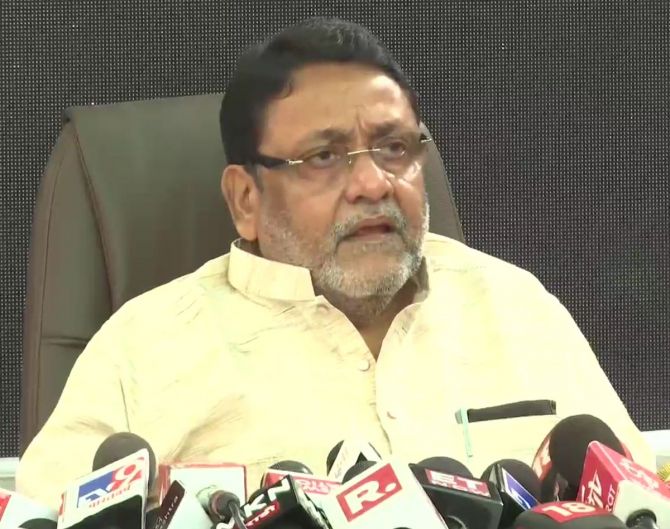 Speaking to reporters in Mumbai, Malik, who is the spokesperson of the Nationalist Congress Party, claimed that Mohit Bharatiya, former president of Mumbai Bharatiya Janata Party's youth wing, was the 'mastermind' of this conspiracy.

Malik also claimed that an amount of Rs 25 crore was sought but the deal was finalised at Rs 18 crore and a sum of Rs 50 lakh was given.

However, the deal got spoilt because the selfie of K P Gosavi (NCB's witness in the cruise drugs case) with Aryan Khan, after his arrest, became viral.

Aryan Khan, 23, was last month arrested following a raid led by Wankhede on a cruise ship from which drugs were allegedly seized.

He was later granted bail by the Bombay high court.

Malik has repeatedly termed the cruise drugs raid as 'fake' and levelled a series of allegations against Wankhede.

The minister on Sunday claimed Wankhede had met Bharatiya at a 'kabarastan' (graveyard) in suburban Oshiwara.

"But, because of his (Wankhede's) good luck, we couldn't get the footage since police's CCTV was not functioning. Hence, out of fear, Wankhede had lodged a false complaint that he was being stalked," Malik said.

"The alleged cruise rave party was a plot to kidnap Aryan Khan for ransom, of which Mohit Bharatiya was the mastermind," the NCP leader alleged.

Accusing Wankhede of being involved in the plot, he claimed Bharatiya was a member of Wankhede's 'private army'.

"Every morning Malik makes new claims. But what about the follow-up of his allegations. Where is the evidence? He had spoken about (the purported visit of the Wankhede's family) to the Maldives and Dubai earlier, but there is no evidence. If Malik has evidence then why he is talking to the media. He should give the proof to the court," the official told PTI.

During his presser, Malik also appealed to Shah Rukh Khan to come forward and support his fight against injustice.

He accused Wankhede of creating fear among drug consumers while protecting peddlers and traffickers.

He claimed the trap to kidnap Aryan Khan was laid through Rishabh Sachdeva, the brother-in-law of Bharatiya.

"Rs 25 crore were sought, and the deal was finalised at Rs 18 crore...Rs 50 lakh were given. The deal got spoilt because the selfie of K P Gosavi (NCB's witness in the cruise drugs case) with Aryan, after his arrest, became viral," he claimed.

"I appeal to him not to get scared. If your child is kidnapped and ransom is sought and the parent pays it, he is the victim and not the accused," Malik said.

Aryan Khan was taken to the cruise party by Pratik Gabba and Aamir Furniturewala, he claimed, adding that Sachdeva, Gabba and Furniturewala were let off by the NCB.

"Kashif Khan, an organiser of the cruise party, had tried hard to invite state minister Aslam Shaikh and children of our top ministers to come to the party," he claimed.

"Besides cases of Aryan Khan and Sameer Khan (Malik's son-in-law), all 26 cases (being probed by the NCB) should be given to the SIT for the probe. If there is an attempt to scare me by putting my son-in-law's case for re-examination, let me be clear that I am not scared," the minister said.

Malik's son-in-law was arrested in January this year by the NCB in an alleged drugs case and was granted bail in September.

The minister on his Twitter handle also posted an NCB notice that was issued to one Sanville Stanley D'Souza under the NDPS (Narcotic Drugs and Psychotropic Substances) Act, dated June 23 this year, directing him to be present at the agency's office.

Malik claimed this is the real name of Sam D'Souza.

D'Souza's name had cropped up in connection with the pay-off allegations in the cruise drugs case.

He said V V Singh called D'Souza for interrogation in June this year and had also warned the latter against changing his phone handset.

"Why hasn't he (D'Souza) been arrested yet?" Malik asked, without revealing the case details.

Bharatiya on Saturday alleged that one Sunil Patil from Dhule, 'who is closely associated with NCP leaders including former Maharashtra home minister Anil Deshmukh', is the mastermind of the cruise drug bust episode.

However, Malik on Sunday claimed Sunil Patil did not belong to the NCP and he had never met him.

He also said the NCB had challenged the Gujarat government's forensic lab report which gave a clean chit to his son-in-law before an NDPS court in the alleged drugs case.

Malik appealed to the NCB and the BJP not to 'shield' tainted persons.

"My fight is not against the NCB or the BJP. It is against those indulging in wrongdoings. Please support me. I am also supporting the eradication of the drugs menace," he said.

Meanwhile, Bharatiya said he never mentioned that he is a BJP leader.

Speaking to reporters, he said Malik did not answer as to how Chinku Pathan, an associate of fugitive underworld don Dawood Ibrahim, had a meeting with the then state home minister Anil Deshmukh.

"Chinku Pathan is a close aide of Dawood Ibrahim...what was he doing in the Sahyadri Guest House on January 20, 2020?" he said.

Bharatiya also said it was only after his press conference that Malik admitted he received a call from Sunil Patil.

He further said Malik himself has admitted that a cabinet minister was also invited to the cruise party.

"(Minister) Aslam Shaikh has to clarify...why and how a person could reach out to the minister and the sons and daughters of ministers?" he said.

Bharatiya said Aslam Shaikh should clarify what is his relation with Kashif Khan that he was invited to the cruise party.