Bharatiya Janata Party state president V Muraleedharan said the CPM leadership had run out of ideas and was trying to suppress its political opponents by physically intimidating them. Arun Lakshman reports 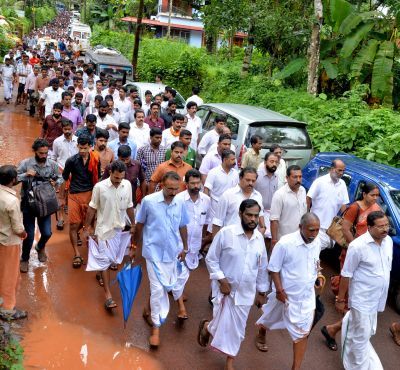 Krishnadas said that Karat had asked his party cadres to implement the ‘Kannur model’ in all parts of Kerala while addressing a gathering in a week ago.

The RSS Kannur district Sharirik Shikshan Pramukh Manoj Kumar was laid to rest in the presence of thousands of RSS, BJP and VHP activists amidst chants of sacred hymns at his residence in Kadirur near Thalassery.

Manoj Kumar alias Elanthottathil Manoj was hacked to death while he leaving home in a Maruti van along with his friend Pramod around 11 am on September 1.

BJP state president V Muraleedharan while speaking at Manoj’s memorial ceremony said the CPM leadership has run out of ideas and was trying to suppress its political opponents by physically intimidating them. "This has been the one political agenda that the party has been practicing since several years in Kerala," he said.

The RSS pranthkarayavahak (state secretary) P Gopalankutty Master while speaking to the gathering said that the CPM was practicing the politics of violence since 3 decades in Kannur district but had failed to suppress the RSS’ activities. He called upon the cadres to work on the high ideological belief set by Manoj and to increase the presence of the organisation in all parts of the district and villages.