Bharatiya Janata Party leader and Union Minister Giriraj Singh on Wednesday took a dig at Lalu Prasad Yadav referring to the Rashtriya Janata Dal supremo's old remarks in which he had described Nitish Kumar as a "snake" and said that now the same snake has entered Yadav's house. When Nitish Kumar snapped ties with the RJD in 2017 and allied with the BJP again, Yadav in a tweet described him as a snake that sheds its skin every two years.

Sharing Yadav's tweet, Giriraj Singh, who has often been critical of Kumar, on Wednesday said, "The snake has entered your home."

He said that Nitish Kumar considers himself prime minister material and his ambition leads him to ditch the people's mandate and jump to the other side to form the government.

"One who cannot become chief minister on his own, dreams about becoming the prime minister," Singh said.

He also dared the JD-U chief to seek a fresh mandate from the people of Bihar.

Even when the BJP was in alliance with JD(U), Singh had many times expressed his reservations about various decisions of Kumar and his stance on various ideological and Hindutva-related issues.

A dharna was held in front of the BJP office at Birchand Patel Marg in Patna that was attended by all party MPs and MLAs from Bihar who vowed to “expose” the 71-year-old JD(U) leader through agitations at district and block levels later this week.

“There is no other reason for the turnaround except his prime ministerial ambitions which make him envious of Prime Minister Narendra Modi. He should first try to win a state election on his own, without using an alliance as a crutch”, said Union minister Giriraj Singh. 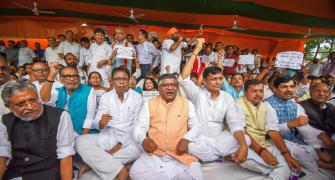 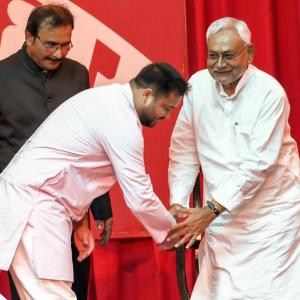