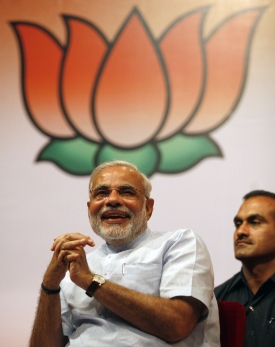 The 17-year-old alliance between the Bharatiya Janata Party and Janata Dal-United was not lucky to survive this time three years after a huge row triggered by Narendra Modi media advertisements in Bihar pushed the National Democratic Alliance partners to brink of collapse.

Tensions between the BJP and the JD-U triggered by the advertisements ahead of the assembly elections in October 2010 may have subsided but the wounds were not healed completely.

As the Gujarat Chief Minister and his Bihar counterpart and JD-U leader Nitish Kumar have had a strained relationship, there was lurking fear that issus relating to Modi could again reopen old wounds.

Modi's elevation as chairman of BJP's election campaign committee for the next Lok Sabha elections and subsequent resignation of party patriarch L K Advani from key party posts put pressure on the JD-U to review its ties with the saffron party.

The advertisements were to coincide with the holding of the two-day national executive meeting of the BJP in Patna on June 12-13, 2010, which brought into open long-existing dissensions and differences between the ruling alliance partners and brought the 15-year-old ties to almost breaking point.

The BJP decided to test its strength by launching the Gujarat chief minister during the meeting with the full knowledge that the move would not be liked by his counterpart in Bihar. The move was seen as a challenge to Nitish in his own turf.

In a well-thought out strategy, the BJP had planned to launch Modi in Patna and accordingly a media campaign was prepared. Big advertisements, seeking to rebrand Modi making him acceptable to the non- Rashtriya Swayamsevak Sangh constituency, were released in the Bihar media. The BJP, which is never tired of repeating the mantra of coalition dharma, apparently did not consult the Bihar chief minister or the JD-U leadership.

Obviously, Nitish was livid and he chose to maintain a distance.

The BJP leadership had declared that it would focus on price rise, Naxalism and terrorism, but the party ended up in Patna provoking Nitish months before the assembly elections.

On June 12, 2010, Nitish cancelled a dinner he was to host for the BJP leaders attending the national executive meeting apparently miffed over a series of full-page ads that appeared in vernacular dailies showing him with Modi hands clasped in a victory sign.

Nitish also threatened legal action against the agency that had released the controversial advertisements. A week after he cancelled the dinner, Nitish returned Rs 5 crore donated by the Gujarat government for Kosi flood relief in 2008.

A few months earlier, Nitish and Modi attended an Akali Dal function in Punjab where the two chief ministers raised their hands clasped in a victory sign. Media flashes of the picture were believed to have come as an embarrassment for Nitish.

The BJP’s central leadership had since undertaken a systematic media exercise to control the damage to its alliance with the JD-U.

In June 2012, Nitish asked alliance partner BJP to name its prime ministerial candidate with secular credentials before the 2014 elections triggering widespread protests from the BJP leaders. In November 2012, Bihar BJP patriarch K P Mishra died after which Modi made an unscheduled surprise air dash to Patna, even as Nitish was holding a rally at Gandhi Maidan for the special status to Bihar. He left without meeting any JD-U leaders but creating a huge media splash as a distraction.

Another sour note in BJP-JD-U ties was struck when except for JD-U, all NDA chief ministers attended the swearing-in ceremony of Modi on December 26, 2012 following his third consecutive win in Gujarat.

In April 2013, the JD-U at its national executive meeting, opposed Modi's projection as the prime ministerial candidate citing his failure to check the post-Godhra riots.

Nitish set a December deadline for the BJP to decide on a secular prime ministerial candidate by December-end adding the leaders in such positions have to sometimes wear a "topi" or sport a "tika".

Nitish has been leading the JD-U-BJP  government since 2005. In the 2005 assembly elections, the JD-U and BJP had contested 139 and 102 seats respectively. While JD-U won 88 assembly seats, the BJP was victorious in 55. He has been able to consolidate his hold on the electorate as was evident in the 2009 Lok Sabha polls when the JD-U improved its position from 5 to 20 seats out of a total of 40 parliamentary seats. The BJP, defying the national trend, had also done well, increasing its tally from 5 to 12 seats.

The NDA was established in May 1998 with 13 constituent parties at that time with JD-U president Sharad Yadav, as its convenor and Atal Bihari Vajpayee as its chairman. In 1999, NDA in Bihar, including BJP and JD(U), won 23 and 18 seats respectively out of 54 seats in the then united Bihar.

Nitish was appointed chief minister on March 3, 2000 but resigned seven days later due to fractured mandate and failing to prove majority.

The February 2005 assembly polls threw up a fractured mandate with the JD-U winning 55 seats and BJP garnering 37 seats out of 243 seats. In the same year, the President's rule was imposed and polls announced again due to fractured mandate.

In the November 2005 assembly polls, The NDA won with a clear majority with the JD-U winning 88 seats and the BJP 55 seats in the 243-member Bihar assembly. NDA's projected leader Nitish became the chief minister with Vajpayee and Advani's blessings.

In the 2009 Lok Sabha elections, the NDA won 20 seats and 12 seats out of 40 seats in Bihar. Nitish prevented Modi to come to Bihar for poll campaign saying Bihar has its own Modi referring to Deputy Chief Minister Sushil Kumar Modi. In the 2010 assembly elections, the NDA won 115 seats and the BJP 91 seats in the 243-member state assembly. Again Modi did not come to Bihar for campaigning.

Image: Narendra Modi's elevation as chief of the BJP election campaign committee led to its split with the Janata Dal-United | Photograph: Amit Dave/Reuters