In the past four years, neither the BJP nor the VHP has shown any interest in the mandir or Lord Ram. Now that elections are nearing, it is attempting to whip up communal passions, says Minister of State for Home R P N Singh in an interview to Anita Katyal The stand-off between the Bharatiya Janata Party and the Samajwadi Party over Vishwa Hindu Parishad’s decision to take out a yatra from Ayodhya has acquired political overtones.

The Uttar Pradesh government has refused permission for the yatra while VHP chief Ashok Singhal has threatened the state government with “adverse consequences” if the yatra was forcibly stopped. If this confrontation escalates, it could result in polarisation of voters.

There are murmurs that the two parties are deliberately creating such tensions in the belief that it would help them consolidate their respective vote banks. The Congress is in a bind on the issue. Although it also has a political stake in Uttar Pradesh, it has little room for manoeuvre as it heads the government at the Centre while the SP extends outside support to it.

It was no surprise that Minister of State for Home R P N Singh spoke cautiously about the Samajwadi Party but did not mince words in attacking the BJP in an interview with Anita Katyal.

The Samajwadi Party and the BJP are locked in a battle over the Uttar Pradesh government’s decision to deny permission to the Vishwa Hindu Parishad for its  proposed yatra from Ayodhya.  What is the Centre’s role in such a situation?

As you are aware, law and order is a state subject and it is for the Uttar Pradesh government to take a view on such matters on the basis of its own internal assessment. The Centre is keeping a watch on the situation in case there are any attempts to disturb communal harmony.

However, I would like to add that it most unfortunate that the BJP thinks of building a Ram temple when elections are round the corner. In the past four years, neither the BJP nor the VHP have shown any interest in the mandir or Lord Ram. Now that elections are nearing, it is attempting to whip up communal passions for electoral gain. But the people of this country have seen through their game and will not allow them to succeed in their mission.

It is sad that the BJP has all the time to stoke communal frenzy but does not care to pass the Food Security Bill in Parliament, which would benefit crores of poor hungry people of this country.

Has the Centre been in touch with the UP government with regard to the VHP’s plans and its threat about adverse consequences if force is used to stop the yatra. Has the Centre sent an advisory to the state?

We are keeping a watch on the situation, and, if the need arises, an advisory can be sent.

Do you think the UP government was right in banning the yatra… it has created an unnecessary confrontation.

As I mentioned earlier law and order is a subject….the Uttar Pradesh government is best equipped to take that decision. But it is evident that whatever is happening is more to do with votes than to do with the Ram mandir.

Do you agree with the perception that the BJP and the Samajwadi Party are doing all this deliberately as both parties hope to gain from a polarization of voters?

The BJP and other political parties invariably shift the focus to the Ram mandir when elections draw near. There is nothing new that we are witnessing today. We have seen this happening in the last several elections but the Centre’s primary concern is that communal harmony should not be disturbed.

On its part, the BJP appears to be a little confused. On one hand, the party wants to reach out to Muslim voters, then you have the VHP’s decision to organise a yatra from Ayodhya and still again a senior leader of their party makes comments about “burqa” and puppies. The BJP voter is completely confused with these statements… it is not clear what the BJP line is and what it stands for. Is it Hindu nationalist, secularist, pseudo-secularist…what does it want to be.

There were recent reports that Samajwadi Party leader Mulayum Singh Yadav would be mediating between the Hindu and Muslim communities to find an amicable solution to the long-pending Ram mandir issue. Do you think Mulayum Singh Yadav is the right choice for this task?

It will not be correct for me to comment on this. After all, it is for both Hindu and Muslim organisations to decide who they would prefer as their mediator… it is their choice.

Switching to another subject….the interrogation of top wanted terrorist Tunda must have revealed useful information about the role of Pakistani terror groups in India.

First, I would like to congratulate the central intelligence agencies and the Delhi police for working in tandem to arrest one of the most-wanted terrorist. Without going into details, I would say that his interrogation has revealed the various ways that the Pakistan-based Laskhar-e-Tayiba and other such organisations have been operating in this country. It has proved that the Pakistan links that India had been spoken about have been proved with his interrogation.

It has also come out that Tunda was a conduit for smuggling fake currency notes into this country. In the past few years we have seen that India is being hit not just by bombs and explosives but also by economic terrorism. The agencies also have information about his network in India and the sleeper modules operating here along with details about his handlers in Pakistan, the modules established by them here as well as the sleeper cells. All this information will prove useful for the agencies in cracking down on terrorist activity. 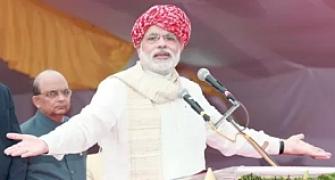 Do your homework before taking on Congress: Modi to BJP 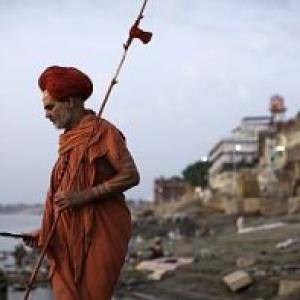