The BJP IT cell has held meetings right down to booth levels and these volunteers have been working for the past six months already. 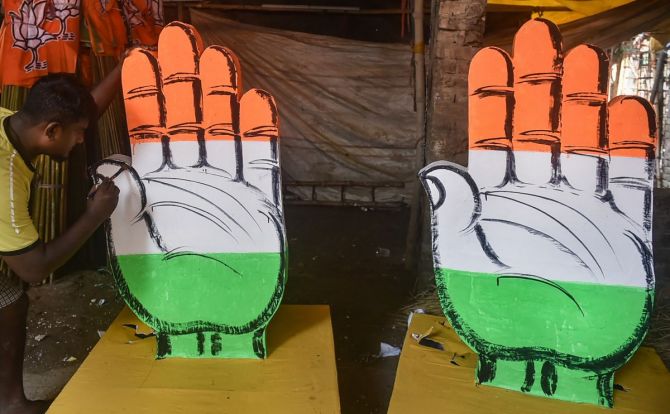 The year was 2007 and it was a first for voters in Gujarat.

Then chief minister Narendra Modi's campaign ahead of the assembly elections was an event like no other.

Especially noteworthy was his 'vaahan'.

People who had collected for small meetings watched slack-jawed as Modi emerged, positioned in the heart of a gigantic 'kamal', from the hydraulic-powered sun roof of his camper van that was equipped with VSAT, plasma TV, videoconferencing facilities, plush interiors, a dining area, a pantry.

Gone are the days.

With the Election Commission of India's bar on public meetings till January 22 and with political parties anticipating the ban on personal contact might continue, new, innovative social media strategies are being put in place hurriedly for the upcoming assembly elections to the five states.

Obviously, of all parties, it is the Bharatiya Janata Party that is best prepared for a digital campaign. But whatever its organisational presence on the ground, the Congress is not that far behind.

"After the ECI guidelines, our campaign will substitute the ground campaign. Earlier, it would have complemented it," says Rohan Gupta, head of the Congress's social media team, a second-generation Congress supporter and the man who has devised the complex network of outreach via digital media.

Gupta, who replaced Ramya as the party's social media head, says the Congress will follow a 'hybrid' digital model: Workers will be brought to Congress headquarters in districts to interact via virtual rallies with the top party leadership.

In addition, there will be an 'army' of 'digital warriors' (not 'influencers' but warriors, he corrects gently) who will operate via WhatsApp groups, and on social media like Twitter.

The heart of the campaign will be the candidates -- who will be connected in a trilateral link with the party organisation, booth-level workers and voters.

There will be micro-targeting and will create a profile of the candidate in each constituency, with outreach to voters via mobiles and on social media, including YouTube.

The manifesto for every state will also be available on many platforms.

Voters will be encouraged to interact with candidates who will be present to answer questions on the manifesto.

Top leaders will join the live sessions on social media.

To oversee all this, a green room will be set up at the party HQs in Delhi, state capitals, and several districts of the poll-bound states, so that leaders can virtually connect with the people.

Green rooms will also operate from the residences of Sonia Gandhi and Rahul Gandhi.

The content of the Congress campaign is equally important.

"As you know, we are in power in Punjab. CM Charanjit Singh Channi has just completed 111 days in government. So we're running the campaign 'ek sau gyarah, Congress dobara'. Every state will have its own tailored campaign," says Gupta.

BJP IT cell chief Amit Malviya says the party has around 650,000 volunteers trained in digital campaigning.

The party had tried out this mode of campaigning in the Bihar and West Bengal assembly elections as well.

In Uttar Pradesh alone, there are around 15,000 IT cell volunteers who have been given training.

The BJP IT cell has held meetings right down to booth levels and these volunteers have been working for the past six months already.

There are proposals to have virtual rally 'grounds' in Lucknow and other capitals.

A digital 'rath' will travel to state capitals and remote areas equipped with LED screen.

If the prime minister addresses people, for example, his speech will be broadcast via satellite to small crowds of people who will be able to view him live via LED screen.

Candidates will hold campaign meetings via Facebook, Twitter, and WhatsApp Messenger. Voice over Internet protocol will also be used by the BJP.

The most disadvantaged are parties like the Samajwadi Party and the Bahujan Samaj Party whose social media network is marginal.

'I would appeal to the ECI to give some funds to parties, so that they can prepare their infrastructure, because we can't compete with the BJP's infrastructure and the democratic set-up is on an equal platform,' Yadav told reporters.

The SP has tweeted a link inviting people to join WhatsApp groups run by party workers in over 400 assembly constituencies of the state.

BSP leader Satish Mishra has been holding virtual rallies. But these are a drop in the campaign ocean, compared to the efforts of the bigger parties.

"We're prepared for the worst," says Gupta, when asked if he expects the ban on rallies to continue.

"As a responsible party, we don't want to become super-spreaders -- unlike others."

The BJP is also confident that because of tried-and-tested strategies earlier, it will be able to carry off a purely digital campaign effortlessly.