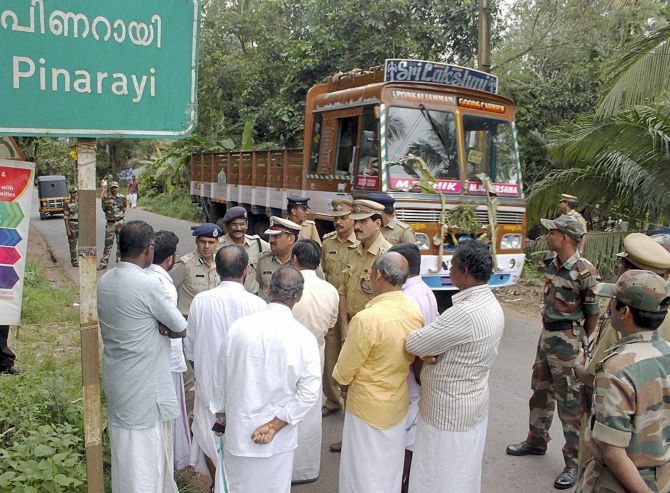 Buses and autorickshaws were off the roads as the 12-hour state-wide hartal called by the Bharatiya Janata Party in Kerala to protest against the brutal killing of a 25-year-old party activist in Pinarayi in Kannur began on Thursday morning.

Early reports said no untoward incident was reported in any part of the state, including the politically sensitive northern district of Kannur, where there is heavy police patrolling.

BJP activist Remith was hacked to death in the home town of Kerala Chief Minister Pinarayi Vijayan on Wednesday within 48 hours of the murder of a Communist Party of India-Marxist activist and toddy shop worker Mohanan, 40, by a six-member gang at Pathiriyad in Kannur district.

Remith’s body will be brought from Kozhikode Medical College Hospital after postmortem to Kannur on Thursday morning and kept at Thalassery new bus stand for public to pay homage at around 10.30 am before cremation.

This is the second hartal in Kannur district within three days as the CPI-M had observed a hartal in protest against the murder of their worker.

Inspector General of Police Northern Range, Dinendra Kashyap said over 2,000 police personnel have been mobilised in Kannur. Those who have gone on leave have been asked to report for duty.

There is simmering tension and more police personnel have been deployed at places where the body will be kept for public homage, he said.

Meanwhile, police have registered cases against 10 CPI-M workers in connection with the attack on Remith. A special squad under Deputy Superintendent of Police (Administration) T P Renjith has been formed to investigate the case.

Police has made special arrangements to take patients, who had come by trains from various parts of the state for treatment at the Regional Cancer Centre Hospital in the state capital.

Examinations which were to be conducted today by Kerala, Kannur, Calicut and Cochin Universities have been postponed due to the hartal.

Reacting to the killing, BJP National President Amit Shah had tweeted, ‘Attacks on BJP karyakartas in CM Pinarayi Vijayan’s home constituency is a matter of grave concern and smacks of political vendetta.’

CPI-M General Secretary Sitaram Yechury had said the violence in Kerala has been started by the Rashtriya Swayamsevak Sangh-BJP combine itself and blaming the state’s ruling party for the same is ‘total fabrication’ of facts.

Vijayan had on Wednesday hit out at the RSS for the growing violence in the state which he alleged was with the support of the BJP government at the Centre.

Vijayan, while speaking at a function in Alapuzha, attacked RSS and BJP over the attack on a Marxist worker in Kannur two days ago and accused RSS of spreading violence in the state.