The Bharatiya Janata Party government in Karnataka on Tuesday scrapped the birth anniversary celebrations of the controversial 18th century ruler of the erstwhile Mysore Kingdom, Tipu Sultan, an annual event the party had been opposing since 2015 when it was launched during the Congress rule. 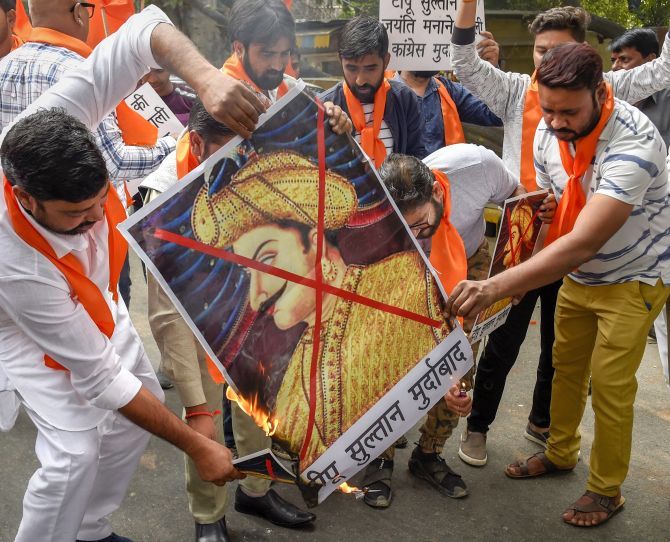 Within three days after coming to power, the Yediyurappa government issued an order cancelling the "Tipu Jayanti" celebrations, initiated by the Siddaramaiah-led Congress ministry as an annual affair on November 10, 2015 amid opposition from the BJP and right wing organisations then.

The celebrations were continued by the Congress-Janata Dal Secular coalition government led by H D Kumaraswamy, which collapsed on July 23 after losing a vote of confidence in the assembly, paving the way for the installation of the BJP ministry that won the trust vote on Monday.

According to the official order, Virajpet BJP MLA K G Bopaiah wrote to chief minister B S Yediyurappa requesting him to cancel Tipu Jayanti celebrations by the state Kannada and culture department, highlighting opposition to such celebrations, particularly in Kodagu district, and the violence it had led to in the past.

The MLA had submitted a petition stating that there had been violence during the celebrations in the past and it should not be repeated.

"After discussion in the cabinet, it was decided that Tipu Jayanti should not be celebrated here on and a government order has been issued to this effect," Yediyurappa told reporters.

The first official celebration in 2015 was marred by widespread protests and violence in Kodagu district, leaving a Vishwa Hindu Parishad worker Kuttappa dead.

The BJP and right wing organisations have been strongly opposing Tipu Jayanti, calling the erstwhile Mysore king a "religious bigot", forcing the authorities to organise the event statewide every year under thick security.

Meanwhile, calling the BJP government's decision a big crime, former chief minister Siddarmaiah said Tipu was not someone who just belonged to minority community, but he was the king of Mysuru, who fought against the British and was a great patriot.

"... not with any other intention, as he was lover of freedom, freedom fighter, we had decided to celebrate it (jayanti). The BJP with malice, because of their hatred towards minorities, they have done this. I oppose this move," Siddaramaiah added.

Tipu was a ruler of the erstwhile Kingdom of Mysore and considered an implacable enemy of the British East India Company.

He was killed in May 1799 while defending his fort at Srirangapatna against the British forces.

Tipu Sultan, however, is a controversial figure in Kodagu district as Kodavas (Coorgis), a martial race, believe thousands of their men and women were seized and held captive during his occupation and subjected to torture, death and forcible conversion to Islam.

He was also accused of execution of Mandyam Iyengars at the temple town of Melkote in Mandya district on the day of Deepavali, as they supported the then Maharaja of Mysuru.

However, the scale of such suppression is disputed by several historians, who see Tipu as a secular and modern ruler who took on the might of the British.

While the BJP and some Hindu organisations sees Tipu as a "religious bigot" and a "brutal killer", a few Kannada outfits call him "anti-Kannada", citing that he had promoted Persian at the cost of the local language.