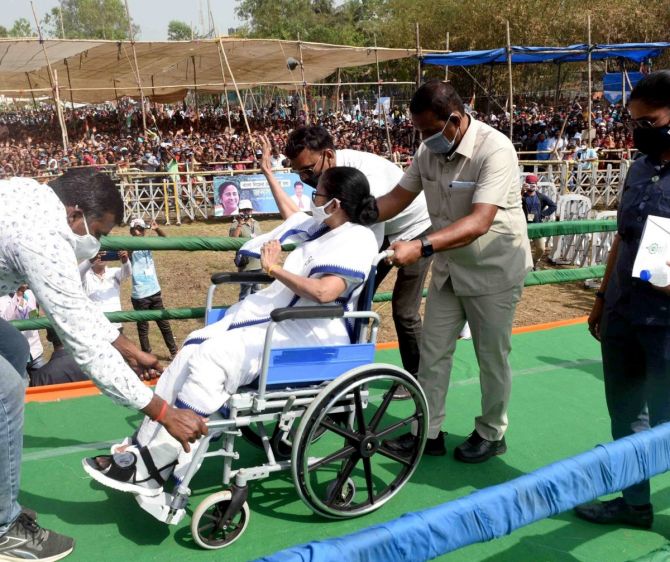 IMAGE: West Bengal Chief Minister Mamata Banerjee arrives at a public rally on a wheelchair at Patashpur, ahead of the State Assembly polls, in East Medinipur, on Friday. Photograph: PTI Photo

On her decision to contest from Nandigram in place of her traditional Bhowanipore seat, the TMC supremo said it was because of the fact that Nandigram and Singur movement was the trendsetter in the field of land reforms in the state.

Addressing a poll rally at Egra in Purba Medinipur district, Banerjee accused BJP of practising 'politics of riot, loot and murder', and urged everyone 'to be on guard against outsiders appearing in their localities'.

"Gaddars (traitors), Mir Jafars have now become BJP candidates to the dismay of old-timers of the saffron party," she said in an obvious reference to Suvendu Adhikari and Rajib Banerjee who had shifted allegiance to the BJP along with other leaders like Mukul Roy.

Mir Jafar, military general of Bengal's last independent nawab Siraj-ud-Daulah, is considered a hate figure for deceiving the besieged nawab during the Battle of Plassey in 1757, paving the way for British rule in India.

The saffron party is witnessing protests from its cadres at several places for giving ticket to TMC turncoats ignoring them.

The TMC, which has made 'Bengali pride' its core poll plank, has called the BJP a 'party of outsiders' as its top leaders hail from outside the state.

Venting her anger against the TMC leaders for switching over to the BJP, she said 'these turncoats' were given many responsibilities in the past but did not do justice with the job.

"I will be monitoring every project so that its benefit reaches everyone," she said.

About her decision to contest from Nandigram, she said, "Many people have asked me why I decided to contest from faraway Nandigram rather than a constituency in Kolkata. I replied, I chose it since the movement against land acquisition in Nandigram (in 2007-2008) and Singur had played a significant role in the field of land reforms in the state.

"Also I consider every corner of West Bengal as my own place."

Banerjee is pitted against her protege-turned-adversary Suvendu Adhikari in Nandigram seat where voting will take place on April 1.

The anti-land acquisition movement at Nandigram had catapulted Banerjee to power in 2011, ending 34-year rule of the Left Front in Bengal.

Slamming the saffron party for chanting 'Hari Hari in front and stabbing from behind', the TMC chief claimed, 'Chewing pan parag and putting tilak on forehead, the BJP carries on attack on people'.

Coining the slogan 'No vote to BJP', Banerjee also asked the crowd not to vote for the Communist Party of India-Marxist and the Congress either 'as they are friends of the BJP'.

The CPI-M, Congress and the fledgling Indian Secular Front have formed an alliance in West Bengal against the TMC and the BJP
in the election of 294-member state assembly.

Banerjee asked the people to maintain vigil outside the counting centres where the EVMs will be kept after polling, saying 'Do not leave the place even if central security and state police ask you to do so'.

"Also if an EVM malfunctions, ensure that the machine replacing it is tested properly."

Alleging that women are not safe in the BJP-ruled states, she said, "In Uttar Pradesh, women are raped and murdered. The father of a rape victim was killed recently.

"If a poor man steals Rs 500 we pounce on him. What about the BJP stealing lakhs of rupees in jumla, what about lakhs of cash being plundered in the name of selling of PSUs? These thefts by BJP leaders are never known publicly?"

The chief minister said, 'Duare Sarkar' (government at the doorstep) camps will be set up again in August-September and will be held twice a year from now on.

Asserting that the victory of the TMC in the assembly polls 'will be the precursor to dislodging the BJP in Delhi', Banerjee said, "If you want me to be at the helm again, make every TMC candidate a winner."

The TMC leader recited 'chandi path' before wrapping up her speech and also wished Muslims, Christians and members of different tribes and castes.

"We are all united and together. None can rupture our unity. This is Bengal", she said.

At the second meeting in Patashpur in the same district, Banerjee took a dig at the family of Suvendu Adhikari, "Purba Medinipur was controlled by a particular set of people.

"I had blindly trusted them but in return I got treachery and betrayal. I could never imagine that from 2014 he was in touch with BJP. I couldn't realise, so I apologise before you," she said without naming Suvendu Adhikari.

At Tamluk, the last stop of her public meetings, the TMC supremo claimed that due to Keleghai Kapaleswari irrigation project the regular flooding of the area has stopped.

She said if BJP is not defeated, the saffron party, which is 'anti-farmers, anti-labourers, anti-women and anti-people', will ultimately 'sell' the country.

The CM said the state government has provided 900 acres of land to ISKCON for a grand temple complex in Nadia, to highlight her government's favourable approach towards religious organisations.

Before ending her speech, she chanted Durga mantra '...narayani namostute' and wished all religions.