News
Business
Movies
Sports
Cricket
Get Ahead
Money Tips
Shopping
Sign in  |  Create a Rediffmail account
Rediff.com  » News » BJP eyes to win over 75 seats from UP in 2024 Lok Sabha polls

Uttar Pradesh deputy Chief Minister Keshav Prasad Maurya on Friday after taking the oath of the office said that Bharatiya Janata Party is targeting to win more than 75 seats out 80 from Uttar Pradesh in 2024 Lok Sabha polls. "The Lok Kalyan Sankalp Matra (manifesto) is our roadmap. We will work according to it and will deliver. Moving forward our aim is 75+ seats in 2024 (Lok Sabha Polls)," said Maurya.

Maurya further added that Yogi Adityanath-led BJP government will continue to work for the welfare of the poor under Prime Minister Narendra Modi's leadership.

"With the second consecutive term of BJP under the leadership of PM Modi, we will continue working for the welfare of the poor," he said.

Yogi Adityanath was sworn in by Governor Anandiben Patel on Friday in a jam-packed Atal Bihari Vajpayee Cricket Stadium having a crowd of more than 50,000 in attendance.

Extending greetings Himachal Pradesh Chief Minister Jai Ram Thakur said that the victory of the BJP in assembly polls is a result of hard work done by the senior leadership of the party.

The newly-elected Chief Minister of Goa, Pramod Sawant who also sealed the victory for BJP in his state in the recently held assembly polls also extended his wishes to his party colleagues in Uttar Pradesh.

"Congratulation to UP CM Yogi Adityanath. I also congratulate all the ministers who took oath today," said Sawant.

Yogi was sworn in by Governor Anandiben Patel in a jam-packed Atal Bihari Vajpayee Ekana Cricket Stadium having a crowd of more than 50,000 in attendance.

A total of 52 ministers took oath as ministers, including two deputy Chief Ministers.

Keshav Prasad Maurya and Brajesh Pathak took oath as the Deputy Chief Minister of the state.

The BJP retained power in Uttar Pradesh by winning 255 out of 403 constituencies, securing a 41.29 per cent vote share. 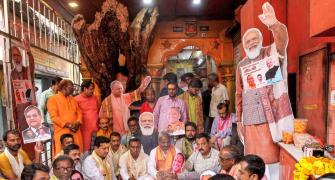 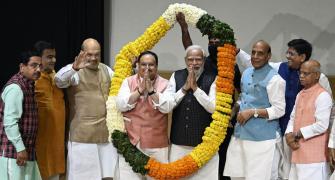 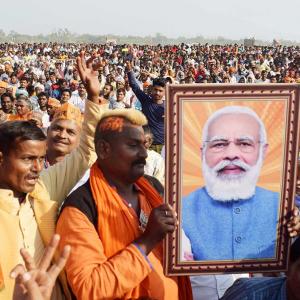 'UP vote was only for Modi's charisma' 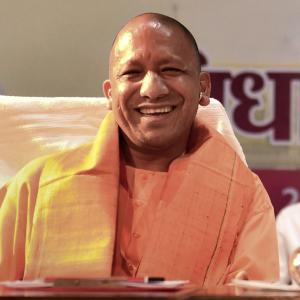