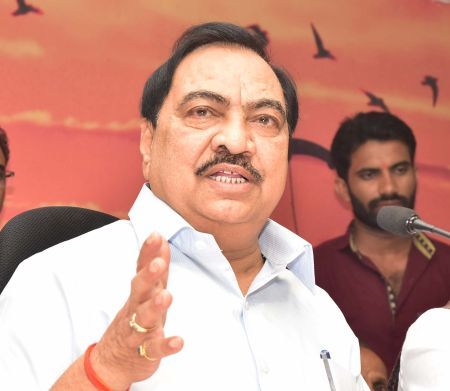 It fielded Eknath Khadse's daughter Rohini from his Muktainagar constituency in north Maharashtra. The decision to field Rohini Khadse indicates the BJP succeeded in placating her father, who had been representing Muktainagar since 1991.

The party dropped Tawde, who holds the school education portfolio in the outgoing BJP-led government, and fielded Sunil Rane from his Borivali seat in Mumbai.

Purohit, the sitting MLA from Colaba in south Mumbai, has been replaced with Rahul Narvekar, son-in-law of Ramraje Nimbalkar, the Maharashtra Legislative Council chairman.

Parag Shah is the BJP candidate in place of Mehta, a former minister, from Ghatkopar (East) in Mumbai.

Bawankule is the sitting MLA from Kamtee in Nagpur district.

One of the senior-most BJP leaders in Maharashtra, Eknath Khadse had been sidelined in the party following allegations of corruption and that he misused his office in a land deal.

He had to resign as revenue minister in 2016 and has not been taken back into the Cabinet by Chief Minister Devendra Fadnavis.

Party sources said it was made clear to him that he would not be given ticket this time.

Khadse, 67, had filed his nomination papers from the seat this week as an Independent candidate.

The BJP has, so far, declared candidates on 150 seats in the state which has a 288-member assembly.

The BJP and Shiv Sena are the main constituents of the ruling alliance in Maharashtra. However, they have still not officially declared their seat-sharing formula.

The Shiv Sena has given AB (nomination) forms to more than 100 candidates.