Voicing concern over nearly 100 deaths in the course of the Amarnath Yatra, the Bharatiya Janata Party on Tuesday demanded extension of the pilgrimage period and proper medical facilities and accommodation for the pilgrims.

A seven-member delegation of BJP MPs, which included Leaders of the Opposition in Parliament Sushma Swaraj and Arun Jaitley, met Home Minister P Chidambaram and urged him to take urgent steps to prevent death of pilgrims and ensure proper facilities for them.

"We have urged the home minister to take urgent steps and do the needful to extend the tenure of the yatra and provide facilities to stop such death which has created anguish across the country," Swaraj told reporters after the meeting.

She claimed one of the major factors behind such high mortality this year was because of drastic squeezing of the yatra duration from the usual 60 days to just 39 days and blamed the Amarnath Shrine Board for the "chaos".

"The problem has also got aggravated because of a severe 'queueing' system introduced this year. When the number of pilgrims to Amarnath should be between 10,000 to 20,000 per day, around 40,000 to 42,000 pilgrims are visiting the shrine every day. As a result, many people have died," she said.

Swaraj said the situation had become more complicated because the queueing system made pilgrims to "suffer" between two and five days in high altitude areas in the midst of heavy rains and extremely cold weather.

She said the rush also caused severe shortage of medical facilities and accommodation because the existing number of tents and huts could in no way cope up with the sudden surge of the pilgrims.

Swaraj said the home minister assured the BJP delegation that he would convey the issues raised by them to Jammu and Kashmir Governor N N Vohra, who is also the Amarnath Shrine Board Chairman.

Swaraj said they have told Chidambaram that had the Shrine Board taken some precautions earlier, many of the deaths could have been prevented.

She raised the issue of construction of a rope-way for the benefits of the pilgrims, an idea first mooted by former state Governor Lt Gen (retd) S K Sinha.

Swaraj also cited the example of Vaishno Devi shrine where many facilities are being provided to the pilgrims who visit the temple the year round.

Referring to the Amarnath yatra, she said, "This is a yatra of Hindu-Muslim unity. This is a yatra which contributes to the economy of Jammu and Kashmir."

BJP, which submitted a memorandum to the home minister, said there was a "very small section of separatists" who had been issuing periodic threats to disrupt the yatra.

"Some people had lost their lives (in a militant attack).

But now that the situation in the Kashmir Valley has substantially improved, there is no such danger either."

"Therefore, we would urge the government to consider this fact and, therefore, the duration of this yatra should be restored to what it was originally," the memorandum said. 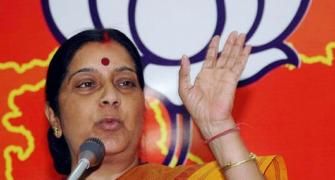 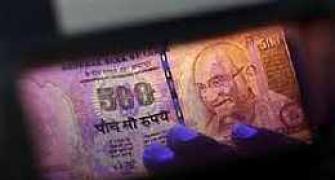 Re drops 65p as dollar gains on EU worries
Article 370 a conspiracy against Kashmiris: Jaitley