The 'deep state' in India is 'chewing' the Indian state much like in Pakistan, Congress leader Rahul Gandhi has said in a frontal attack on the Modi government, provoking a predictable backlash Saturday from the ruling party which branded him a 'part-time, immature, unsuccessful leader' who betrayed the country with his remarks made on foreign soil. 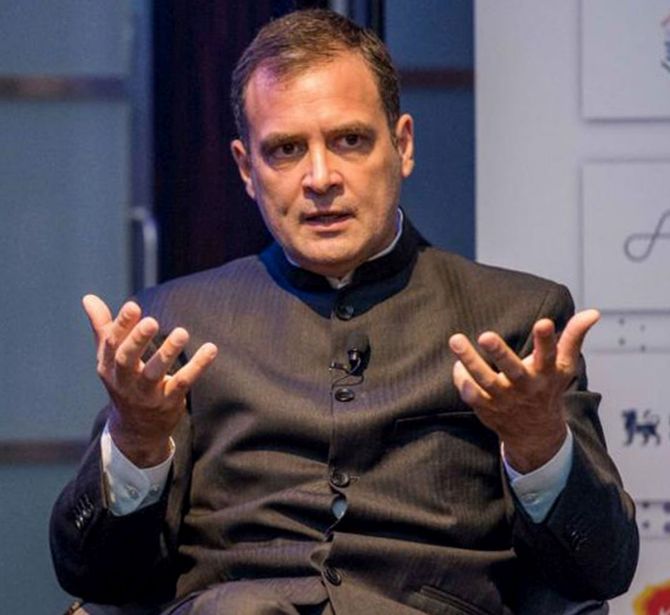 IMAGE: Congress leader Rahul Gandhi having a conversation at the 'Ideas for India' conclave, in London on Friday. Photograph: ANI Photo

During an interactive session at the 'Ideas for India' conference in London on Friday, Gandhi not only mounted a scathing attack on the Bharatiya Janata Party government but also extended an olive branch to regional parties who he had angered with his comment that they were not capable of taking on the saffron party for want of ideology.

In a blistering assault, Gandhi said the soul of India is under attack from the BJP and 'a soul without a voice means nothing and what has happened is that India's voice has been crushed'.

Gandhi alleged India's voice has been crushed by the institutional framework of the country itself which is becoming parasitical.

"So, the deep state, the CBI, the ED, is now chewing the Indian state and eating it, much like in Pakistan," he asserted.

An angry BJP shot back on Saturday, accusing Gandhi of harming India in his 'hate' against Prime Minister Narendra Modi, and alleged his frequent critical remarks about the country from foreign soil amounted to 'betrayal'.

BJP spokesperson Gaurav Bhatia launched a sharp attack on the Congress leader for his remarks at the London event where Gandhi accused the ruling party of spreading 'kerosene all over the country, you need one spark and we will be in big trouble'.

It is the Congress which has been carrying kerosene to incite riots since the 1984 anti-Sikh riots, he alleged, dubbing Gandhi a 'part-time, immature, unsuccessful leader of a hopeless Congress' who has often spoken negatively about the country in foreign places like the United States, the United Kingdom and Singapore.

"He keeps making such comments frequently and it will not be wrong to say that this amounts to betraying the country," Bhatia said.

At the 'Ideas for India' conference organised by non-profit think-tank Bridge India, Gandhi was at pains to explain away his remarks targeting the regional parties, saying the Congress respects them and does not want to play 'the Big Daddy'.

The former Congress chief asserted his party will coordinate with regional outfits to launch a nationwide movement against the ruling dispensation and reach out to people in a big way.

"We have to coordinate with our friends in the opposition. I don't view the Congress as the 'Big Daddy'. It is a group effort with the opposition. But it is a fight to regain India," he said at the conclave.

A video of the event was released by the Congress on Saturday.

"The point I made in Udaipur, which was misconstrued, is that this is an ideological battle now. It is a national ideological battle, which means that of course we respect the DMK as a Tamil political organisation, but the Congress is the party that has the ideology at the national level," Gandhi said.

So, the Congress will have to think about itself as a structure that is enabling the opposition, he said during the hour-long interaction.

"In no way is the Congress superior to the other opposition parties, we are all fighting the same battle. They have their space, we have ours, but an ideological battle is taking place is between the national vision of the RSS and that of the Congress," Gandhi added.

Gandhi's remarks on regional parties, which came in the presence of opposition leaders like Sitaram Yechury and Tejashvi Yadav, are in sharp contrast to his comments at the Congress' three-day 'Chintan Shivir' in Udaipur.

There he had said that it is only the Congress that can fight the BJP at the national level and regional outfits cannot fight this battle as they do not have an ideology.

Gandhi also said the BJP has a '100 per cent control' over media, and communication and broad control over the institutional framework.

"We will not be able to match the funds they have, we will have to think of communication and funding in a completely new way. We have to think about an organisational structure that is much closer to the masses.

"We will have to think of a large-scale mass movement on issues like unemployment, prices and on regional matters," he said, adding the Congress will seek the support of regional parties for this.

At the London conclave, when asked about the Russia-Ukraine conflict, Gandhi drew parallels with the Chinese actions in Ladakh.

Bhatia berated Gandhi for comparing the situation in Ladakh to the Russia-Ukraine conflict, alleging the Congress leader insulted the sacrifices of Indian soldiers in the Galwan Valley.

"Being in opposition does not mean that one should damage India in hate," he said.

Bhatia called Gandhi a 'habitual offender' who always commits a bigger mistake than the last time.

Lashing out at the Congress leader, he said Gandhi should not compare India with Pakistan which has been under military rule for over half the time it has been in existence and goes around with a 'begging bowl' for survival.

'Beware! Rahul Gandhi in comparing India with Pakistan. India was, is and will remain great,' Bhatia asserted.