The ruling Bharatiya Janata Party has managed to contain dissent in most areas in the run-up to the Goa assembly polls scheduled for February 14, but four seats, including the prestigious Panaji constituency, continue to be a cause for worry. 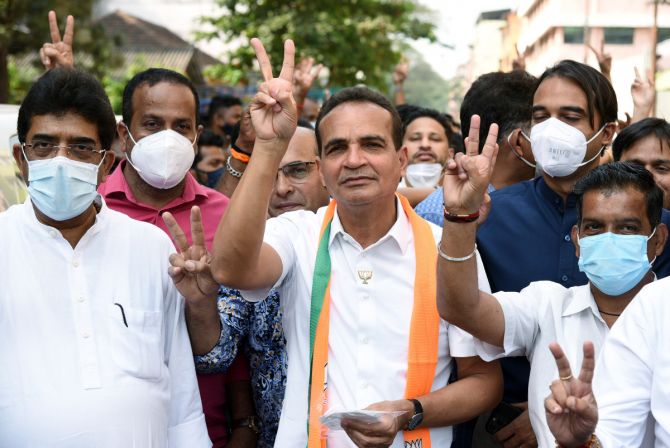 In Panaji, Utpal Parrikar, the son of former chief minister and BJP's tallest leader from Goa so far the late Manohar Parrikar, is up as an independent against the ruling party's Atanasio Monserratte, who had quit the Congress in 2019.

Utpal has claimed his heart continues to be with the BJP but he was contesting to ensure a "wrong person", possibly a reference to the serious cases registered against Monserratte in the past, does not get elected from a seat his father represented for several terms.a

In Mandrem, former chief minister Laxmikant Parsekar, who was the BJP's manifesto committee head, has quit the party and is contesting as an independent against Dayanand Sopte, who had beaten him as a Congressman in 2017.

In Sanguem, Savitri Kavlekar, the wife of deputy chief minister Chandrakant Kavelar, who had joined the BJP from the Congress, has rebelled and is contesting against the ruling party's Subhash Phaldesai, a former MLA.

Sanguem, which is near Quepem assembly seat from where Chandrakant Kavlekar is the BJP nominee, was represented in the current House by independent legislator Prasad Gaonkar, who is now the Congress nominee.

In Cumbharjua, the BJP has managed to calm down Siddhesh, son of Union minister Shripad Naik, who had announced he would contest as an independent candidate after being denied a ticket by the ruling party.

However, BJP candidate Jainita Madkaikar, wife of sitting MLA Pandurang Madkaikar, will have to contend with former colleague Rohan Harmalkar, who is contesting as an independent candidate from Cumbharjua.