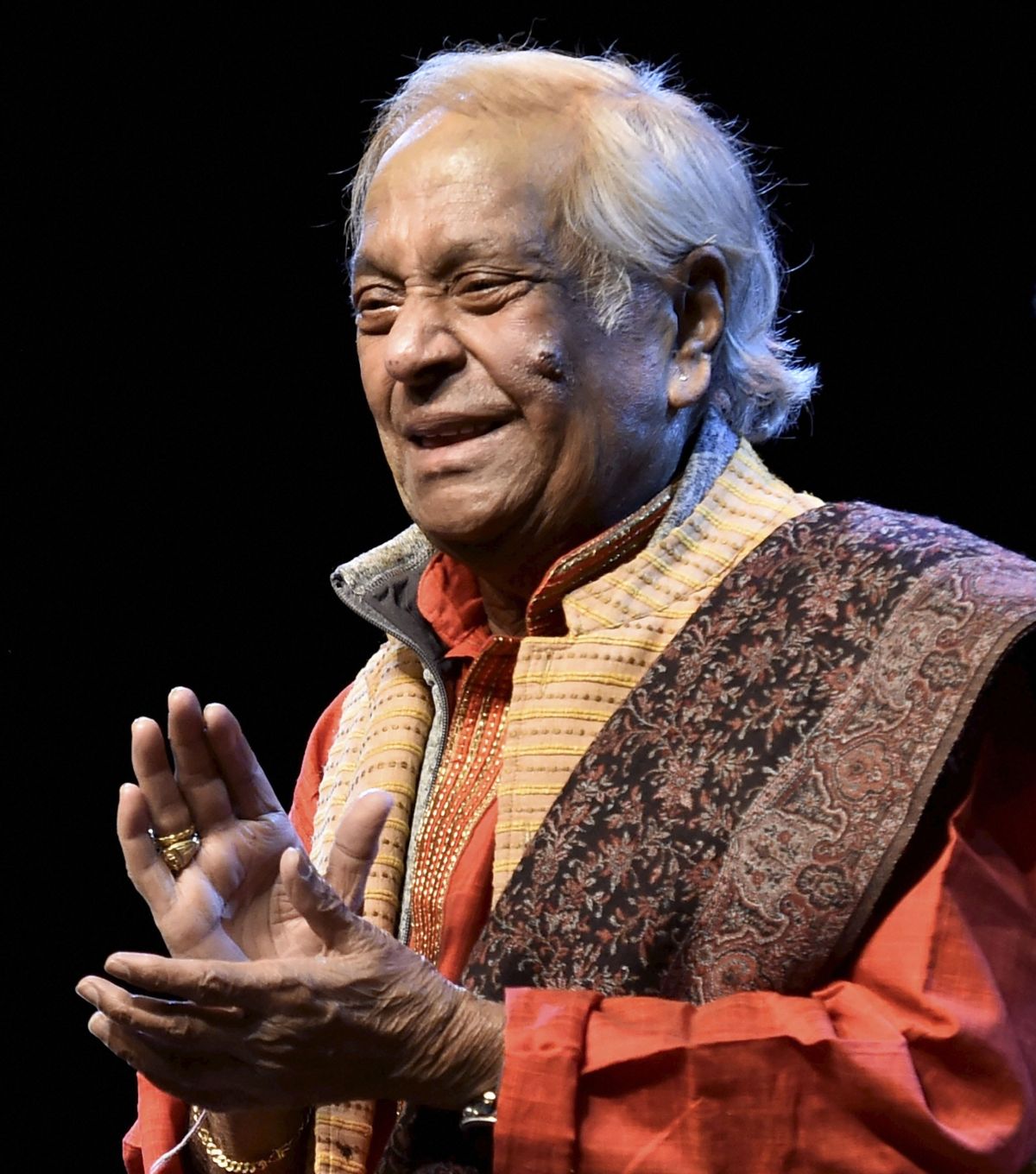 IMAGE: Kathak maestro Pandit Birju Maharaj at the ceremony of the presentation of the ‘Sumitra Charat Ram Award for Lifetime Achievement (2019)', at Kamani Auditorium in New Delhi. Birju Maharaj died at his home in Delhi on January 17, 2022. Photograph: Ravi Choudhar/PTI Photo

He romanced Kathak like few others ever did, his mastery over the classical dance form writing him into lasting fame as one of India's greatest performing artistes.

Birju Maharaj lived as he died.

He grew up with the ghungroo, tabla and harmonium striking rhythms of harmony and as took his last breath in the early hours of Monday his home was quite fittingly alive with the sound of music -- this time old songs he so loved.

“He had his dinner and we were playing ‘antakshari' because he loved old music… suddenly his breathing became uneven. We think it was cardiac arrest as he was also a heart patient… He was laughing and smiling in his last moments," said his granddaughter Ragini recalling the last moments of a life dedicated to dance.

The legendary dancer, a guru in the traditional sense who not just took Kathak to the world but also passed on his craft to generations of students, would have been 84 on February 4.

He was the consummate artiste, a poet, writing under the pen-name 'Brijshyam', a vocalist who had mastered thumri and other forms too, and also an instrumentalist. But it was Kathak, that most graceful Indian classical dance form, which became his calling in life.

He dedicated every waking minute to finetuning and popularising the craft in India and beyond its shores.

Born the more prosaic Brijmohan Nath Mishra, Birju Maharaj, who would go on to rule many a stage with his impeccable footwork and emotive, stylised story telling the Kathak way, once recalled how he was just three when he would walk and waddle towards the “taleemkhana” where young students were taught dance skills as well as the harmonium and the tabla.

It was those early growing up years at his ancestral home in Lucknow that gradually moulded the young Mishra into Birju Maharaj, the leader of Lucknow's Kalka-Bindadin Gharana.

“It was like a sea of rhythm and beat, and for seven generations that was the only topic of discussion back home. Laya, swar, taal, bhangima, saundarya, aur nritya (rhythm, tone, beat, pose, beauty, and dance) that was all we talked about.

“All we heard was the sound of ghunghru, tabla, and harmonium. Everybody would start practising at 4 in the morning, I would also get there with some sweets in my pocket. Sometimes I would try my hand at a tabla or a harmonium, had started learning bit by bit from the very beginning,” he told PTI in an interview.

Born in the house of Kathak exponent Jagannath Maharaj, better known as Acchan Maharaj, Birju Maharaj started performing from the age of seven.

He began as a young child by accompanying his father to places such as Kanpur, Allahabad and Gorakhpur and then on to far off places, including Kolkata and Mumbai, where he shared the stage with him.

And then tragedy struck.

His father died and the young Birju Maharaj moved to Delhi and started teaching Kathak at the Sangeet Bharti to support his family. He was just 13 at the time.

He also taught at the Bharatiya Kala Kendra in Delhi, and at the Kathak Kendra (a unit of the Sangeet Natak Akademi) where he was head of faculty and director, retiring in 1998.

His fame grew over the years. Soon, there came a time when Kathak, a form of dance that uses expressions and fluid movements to tell a 'katha' meaning 'story', became synonymous with Birju Maharaj.

In his last interview to PTI, less than two months ago, the ageing and still graceful artiste spoke of his optimism for the future and the younger generation carrying forward the traditions of Kathak despite the many distractions of the modern world.

"Artistes who passionately work towards carrying the tradition forward are the right torchbearers of an art form and its legacy. It takes a lot of work and dedication to stay true to a mighty tradition such as classical dance," the Padma Vibhushan awardee had said.

It has been a many splendoured career.

Birju Maharaj went on to choreograph pieces like Makhan Chori and Phaag Bahar.

Even when he was in his 70s, he worked on full-length mythological and historical dance-dramas, including Katha Raghunath Ki, Krishnayan and as well as Darbar-e-Salaami, Shaahi Mehfil.

In his last years, he moved to abstract and rhythmic compositions such as Laya Parikrama, Naad Gunjan and Ghunghru Sangeet.

And then there were some great film moments too.

In a bit of interesting film history, the song was written by Bindadin Maharaj, Birju Maharaj's grandfather's brother who was a dancer and thumri exponent in the court of Nawab Wajid Ali Shah.

The two brothers went on to establish the Kakla-Bindadin Lucknow Gharana.

Both films were directed by Sanjay Leela Bhansali.

As one of India's most recognised names in the classical firmament, the awards were many, including the Padma Vibhushan, Sangeet Natak Akademi, Kalidas Samman, Nritya Vilas, Rajiv Gandhi Peace Award as well as a National Film Award for choreography in Vishwaroopam and a Filmfare Award for Bajirao Mastani.

Some bits of his life will be forever interwoven in history.

The house on Gwynne Road in Lucknow Birju Maharaj grew up in is now a Kathak museum.

He also stayed connected to his ancestral village, Handiya Tehsil near Allahabad, which has a 'Kathakon ka Talab' (pond of Kathak dancers) and a 'Sati ka Chauraha', where his grandmother burned on a pyre with his grandfather.