The Centre on Saturday said the outbreak of bird flu or avian influenza has been reported in Uttar Pradesh, taking the total number of affected states to seven. 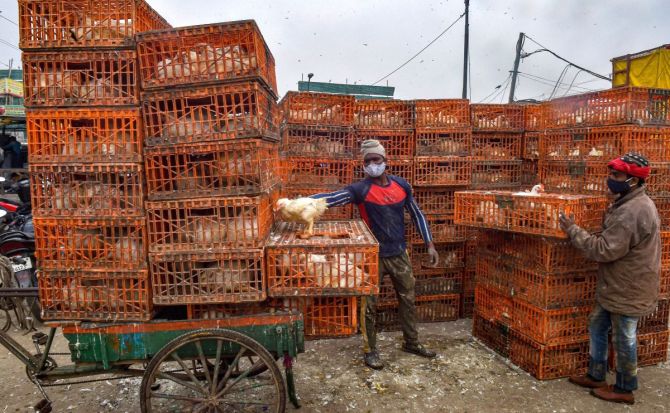 However, the confirmation of bird flu in Delhi, Chhattisgarh and Maharashtra, is awaited as the samples have been sent for testing, it said.

Besides Uttar Pradesh, the other six states where bird flu is confirmed are Kerala, Rajasthan, Madhya Pradesh, Himachal Pradesh, Haryana and Gujarat.

"So far, the disease has been confirmed from seven states. ...The Department has issued advisory to the affected states so as to avoid further spread of the disease," the Ministry of Fisheries, Animal Husbandry and Dairying said in a statement.

In Chhattisgarh, reports of unusual mortality of birds in poultry and wild birds in Balod district were reported on Friday night and Saturday morning. The samples have been sent to the labs concerned. In Delhi, reports of unusual mortality in ducks were received from Sanjay lake and the samples have been sent for testing, it said.

Similarly in Maharashtra, the samples of dead crows from Mumbai, Thane, Dapoli, Parbhani and Beed districts have been sent to Bhopal-based ICAR-National Institute of High Security Animal Diseases, it added.

On the status of culling operation, the ministry said it has been completed in two affected districts of Kerala. Central teams have reached Kerala, Haryana and Himachal Pradesh for monitoring/ epidemiological investigation.

The Centre has also asked state governments to ensure effective communication and coordination with health authorities for close vigilance on the outbreak and to avoid any chances of spreading of the disease to humans.

States have been asked to increase surveillance around water bodies, live bird markets, zoos and poultry farms and also to ensure proper disposal of carcass, and strengthening of bio-security in poultry farms.

They have also been asked to be prepared for any eventuality of avian influenza and ensure sufficient stock of PPE kits and accessories required for culling operations.

"Chief Secretaries/Administrators were requested to arrange to issue appropriate advisories to quell consumer reactions, affected by rumours and increase awareness regarding safety of poultry or poultry products that are safe for consumption following boiling/ cooking procedures," the statement added.

Meanwhile, the anxiety over spread of the disease has hit the poultry industry as prices of eggs and broiler chicken have fallen owing to decline in demand.