Home Minister Amit Shah on Wednesday defended amendments to an anti-terror law, saying they are was essential to keep law enforcement agencies one step ahead of terrorists. 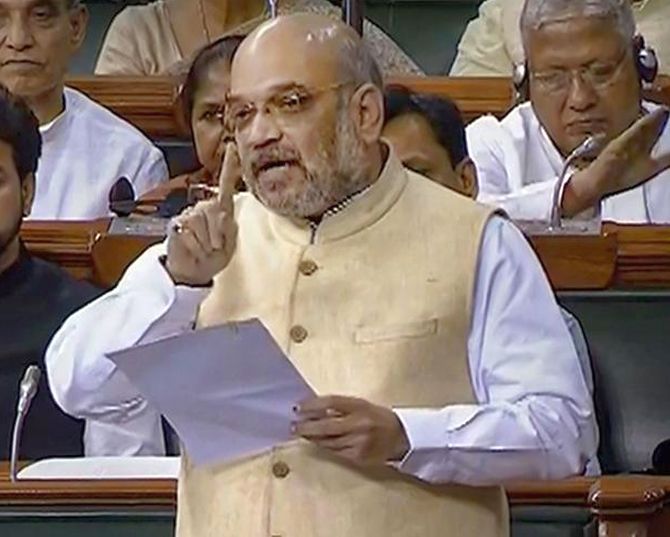 Responding to a debate in Lok Sabha on a bill seeking to amend the Unlawful Activities Prevention Act, he asserted anti-terror laws would not be misused and used only to root out terrorism.

He said that provision in UAPA (amendment) bill, which was later passed in the Lower House by a voice vote, to designate a person suspected to have terror links as terrorist is necessary to root out terror.

Hitting out at the Congress for opposing the amendment, he said if the United Progresive Alliance was correct in amending anti-terror laws in their tenure, then so is the National Democratic Alliance.

He said, in the name of ideology, some people promote urban Maoism and the government has no sympathy towards them.

The government fights terrorism and it should not matter which party is in power, Shah said, referring to amendments made in anti-terror laws by successive governments.

During a division of votes, demanded by All India Majlis-e-Ittehadul Muslimeen's Asaduddin Owaisi for consideration of the bill, as many as 287 MPs supported it and only eight opposed it.

Amendments brought in by some opposition members were also defeated by huge numbers during division of votes.

When the AIMIM member insisted on division of votes over amendments, Speaker Om Birla quoted rule to say that he can ask the members supporting or opposing them to stand up for counting, if he feels it appropriate.

The proposed law allows the National Investigation Agency to go to any state without taking permission from state police concerned for checking anti-terror activities.

In his speech, Shah lashed out at people behind urban Maoism, a term used by the BJP and its ideological allies for those it blames for supporting Maoists, and said the government had no sympathy for them.

"In the name of idelogy, some people promote urban Maoism. We have no sympathy for them," he said.

Left wing violence was initially considered an ideological and gullible people were misguided to kill others, he said.

"The only purpose of this law is to root out terrorism. We will ensure that this law will not be misused," he said.

The Congress under the then Prime Minister Indira Gandhi had brought in the UAPA, he said, targeting the opposition party, whose members earlier questioned the rationale behind the law.

Radical preachers are propagating ideology of hate and terrorism, Shah said, claiming that terrorism is born out of a person's mindset and is not about institutions.

"It is the priority of the government to root out terrorism," he said.

If somebody indulges in terrorist activities then definitely the NIA will seize his computers and other devices, he added.

Members of the opposition in the Lok Sabha concern over amendments to the Unlawful Activities (Prevention) Act, saying the provisions were against the federal structure of the country.

This is against the federal structure of the country, Trinamool Congress MP Mahua Moitra said during a debate bill.

Opposing the Bill, she said when the NIA itself is under a cloud, there is also apprehension of the agency being misused for political vendetta.

"Features of the bill are anti-people and anti-Constitution...it is a very dangerous act," she added.

During the debate, Moitra said, "One runs a risk of being branded as anti-national if you oppose the government".

"Every time the opposition disagrees with national security, we are called anti-national by the propaganda machinery and troll army of the government," she said amid uproar from treasury benches.

BJP MP S S Ahulwalia raised point of order that members cannot make allegation against the government without substantiating it.

Minister of State for Parliamentary Affairs Arjun Ram Meghwal said it is derogatory and the government has not called any one anti-national.

However, after intervention from the chair she was allowed to speak.

The provision to declare an individual as terrorist is without due process and against principle of natural justice, she said.

Nationalist Congress Party MP Supriya Sule said when amendments to the National Counter Terrorism Centre and National Intelligence Grid were made, the then chief minister of Gujarat (Narendra Modi) had "opposed" the bills.

"It was the Centre's duty to consult states...federal structure are being snatched," she said quoting the then chief minister of Gujarat.

Bahujan Samaj Party MP Danish Ali raised apprehensions about the misuse of the proposed law and of innocent being harassed.

Citing example of POTA and TADA, he said these laws were repealed by this House itself because of rampant misuse.

Telangana Rashtra Samithi MP V N Borlakunta said the provision of the bll is taking away rights of states and it is against the federal spirit of the Constitution.

Pointing out that the proposed amendment gives absolute power to the central government, Congress MP Md Jawed said arresting an individual as a terrorist on the basis of suspicion alone is "dangerous".

Will government provide compensation to those who are victim of misuse of such a law, if applied, he asked.

Participating in the debate, Shiv Sena MP Vinayak Raut said the bill would help in controlling terrorist activities in the country.

He alleged that the previous government was not able to control this menace because they used laws for political purposes.

"They were not successful in controlling terrorism," he said.

He demanded the government further strengthen the judicial system for timely implementation of rulings in terrorism-related cases to create fear in minds of terrorists.

"Within three years, it should be implemented," Raut said.

Biju Janata Dal MP Pinaki Misra said there should be a better coordination among different agencies and NIA. The coordination should be done through an institutionalised set up and not on case-to-case basis, he said.

He also suggested that crimes including bio-terrorism and narco-terrorism should be covered under the purview of this law.

"State should also give time-bound reports..Judicial system needs to be further strengthened and there is also a need for police reforms," he said.

Misra also said that there is a need to ensure that minorities do not suffer and police should file a chargesheet within 90 days and not 180 days as mentioned in the bill.

He added that people gave large mandate to this government as they have trust that it wouldprovide proper safety and security.