Bill for SC/ST quota in govt promotions gets PM's nod

Prime Minister Manmohan Singh on Thursday agreed to bring a Constitution amendment bill for reservation to the Scheduled Castes and Scheduled Tribes in promotions in government jobs while responding to vociferous uproar in both Houses of Parliament on Thursday.

Dr Singh took the decision in an impromptu meeting with Bahujan Samaj Party supremo Mayawati and other MPs after the second 15-minute adjournment of the Rajya Sabha after her colleagues stormed into the well of the House.

The Question Hour was also washed out with an adjournment, as she led the demand for an immediate Constitutional amendment.

Mayawati wanted reversal of an April judgment of the Supreme Court striking down her decision as then chief minister of Uttar Pradesh for reservation in promotions in the state government jobs and insisted that Parliament enact the law to nullify the court's ruling.

Disrupting the House right at the start on the second day of Parliament's monsoon session, she took to task the government for breaking the promise made in the last session to call an all-party meeting and insisted that there was need of the law and not just a meeting.

The BSP had raised the Supreme Court order issue in the budget session too, demanding a constitutional amendment to provide for such quotas.

The BSP and Samajwadi Party MPs also stormed into the well in the Lok Sabha right at the start of the Question Hour, but Speaker Meira Kumar tactfully handled the situation by allowing some of them to speak briefly and also admitting a discussion on the issue.

Normalcy was also restored in the Rajya Sabha after the Prime Minister and Home Minister Sushil Kumar Shinde present in the House during the second adjournment grasped the gravity of demand and invited the opposition leader for discussion.

Minister of state for PMO V Narayansamy later announced in the House that the PM would call an all-party meeting on August 21 and that "on August 22, the government will be able to bring the Bill in the House" on the basis of the consensus".

In the Lok Sabha, SP's Shailendra Kumar took the lead in voicing fears in the minds of a number of SC/ST government employees on the lack of reservations in promotions while BSP's Dara Singh Chauhan wanted immediate restoration of reservation in promotions.

Their demand was also backed strongly by Panna Lal Punia of the Congress who is also chairman of the National Scheduled Castes Commission as he asserted that five persons sitting on the Supreme Court bench cannot be allowed to take away the right to reservation given to SCs and STs by Parliament.

Parliamentary Affairs Minister Pawan Kumar Bansal brought down the tempers to facilitate resumption of the Question Hour by pleading that the government was pro-active in ensuring the rightful place to Dalits and treats the issue as utmost important.

Admitting that a meeting the government was to have on the matter could not take place over the last one-and-half months due to other engagements, he asked the agitated members not to force a decision in a hurry as the government wants a decision that stands test of time instead of going back to the Supreme Court to review its ruling.
A Delhi Correspondent
Related News: Bahujan Samaj Party, Supreme Court, Houses of Parliament, House, Lok Sabha
Print this article
Assam storm hits Parliament on Monsoon session opening day 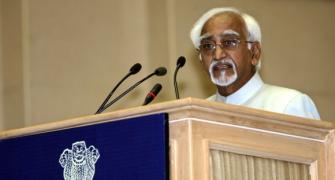