Some of the convicts in the Bilkis Bano case of the 2002 Gujarat riots are "Brahmins" with good 'sanskaar' or values and it is possible they may have been fixed due to their past family activities, a Bharatiya Janata Party MLA, who was a part of the state government panel that recommended remission to all the 11 men found guilty, said on Thursday. 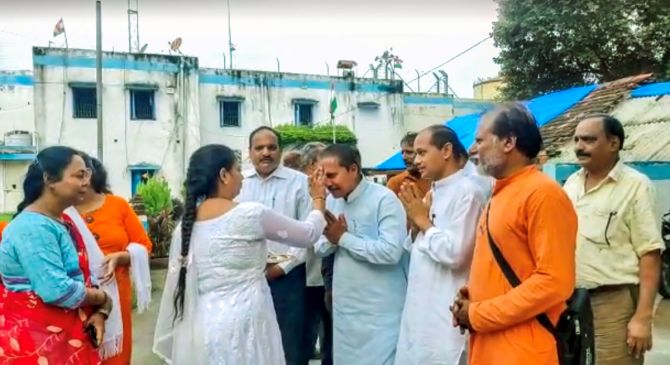 IMAGE: People convicted for rape and murder in the Bilkis Bano case of the 2002 post-Godhra riots, being welcomed as they come out of the Godhra sub-jail after the Gujarat government allowed their release under its remission policy, in Godhra. Photograph: PTI Photo

C K Raulji, the BJP MLA from Godhra, said he does not know whether the convicts, released after spending more than 15 years in jail, were involved in the crime.

On August 15, all the 11 convicts sentenced to life imprisonment in the 2002 case of Bilkis Bano's gang rape and murder of her seven family members during the communal riots walked out of the Godhra sub-jail after the BJP government in Gujarat allowed their release under its remission policy.

"We took the decision on the basis of a Supreme Court order. We were asked to look at their (convicts') behaviour and decide (on their early release)," Raulji, who was one of the members of the government-appointed committee that recommended granting of remission to the convicts, told a news portal.

"We asked the jailer and learnt that their behaviour was good in the prison...also (some of the convicts) are Brahmins. They have good 'sanskaar' (values)," said the ruling party legislator.

The Gujarat government's decision has invited sharp criticism from the opposition parties who have said the move was against the Centre's guidelines.

However, Raulji said the convicts may have been fixed.

"It is possible that they (the convicts) might have been fixed in the case due to their past family activities. When such riots take place it happens that those who are not involved are named. But I don't know if they committed the crime, we decided (on remission) based on their behaviour," he said.

Asked about the welcome accorded to the 11 men after their release from prison, he said they had not welcomed them.

The Gujarat government released the 11 convicts after the Supreme Court directed it to consider their plea for relief under the state's 1992 remission policy.

A special CBI court in Mumbai had on January 21, 2008, sentenced to life imprisonment all the 11 accused in the case for murder of seven family members of Bilkis Bano, a riots survivor, and her gang rape. Their conviction was later upheld by Bombay high court.

These convicts served more than 15 years in prison after which one of them approached the Supreme Court with a plea for his premature release.

The apex court had directed the Gujarat government to look into the issue of remission of his sentence as per its 1992 policy on the basis of the date of his conviction. Thereafter, the government formed a committee which took the decision to allow release of all the convicts.

On March 3, 2002, Bilkis Bano's family was attacked by a mob at Randhikpur village in Limkheda taluka of Dahod district. Bilkis, who was five months pregnant at the time, was gang raped and seven members of her family were killed during the riots triggered by the Godhra train burning incident.