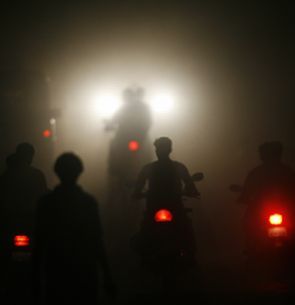 A 19-year-old youth was killed and another injured on Sunday when the police opened fire during an attempt to stop a large group of bikers from performing dangerous stunts in the high-security area of the national capital in the wee hours.

The police claimed that the group of bikers turned violent when they were asked to stop their stunts and started pelting stones between 2 and 2.15 am near WindsorPalace in New Delhi district, injuring some policemen, following which the cops fired warning shots but the bikers did not relent.

An inspector fired a bullet to puncture a motorcycle's rear tyre, but at that very instance the biker did a stunt and the bullet hit the victim Karan Pandey, who was riding pillion, in the back, a senior police officers said.

Punit Sharma, who was riding the bike, was also injured in the incident, they said. Both of them were rushed to Ram Manohar Lohia hospital, where Pandey was declared dead.

Although cops claimed that the killing of the youth was an accident, his family members and others questioned whether the police could have had employed other options.

Pandey's mother accused the cops of high-handedness and demanded the death penalty for the guilty police personnel.

"They don't fire at terrorists and criminals. My son was not a thief or a dacoit. The police has wronged as they don't have the right to kill a child. Cops who killed him should be hanged," said Pandey's mother Manju.

Questioning the police version, she claimed her son didn't even know how to ride a motorbike and demanded that a post-mortem be done by a team of doctors.

"My son doesn't even know how to ride a motorcycle and we also don't have a motorbike at home. He also doesn't indulge in drugs. If he was indulging in hooliganism or had misbehaved with them, they could have lathicharged or arrested him, but they shouldn't have fired at him. He was my only son," she said.

A magisterial probe is likely to be ordered as is generally the norm in such incidents, official sources said.

The police officer said, "A police control room call was received that 30-35 bikers were performing stunts opposite Gol Dakhana. When two PCR vans reached WindsorPalace, opposite Le Meridian hotel, the bikers ganged up and started pelting stones at the police party during which the PCR vans were damaged and some policemen were injured.

"When the youths overlooked several warnings and aerial shots fired by the police. inspector Rajneesh Parmar of the police control room fired from his service revolver in a bid to puncture a motorcycle's rear tyre, but just at that very instance the biker did a stunt and the bullet hit the victim, Karan Pandey, who was riding pillion, in the back."

Sharma was treated for injuries and he is out of danger, doctors treating him said.

Kusumlata, Punit's mother, said, "The police should not have fired. These were young children. Children do mistakes, but it gives no right to the police to claim someone’s life."

Pandey’s post-mortem will be carried out on Monday.

In an effort to curb youths from performing risky motorcycle stunts around India Gate, the Delhi police had carried out a late night drive in the area, slapping fines on 84 motorcycle riders and impounding eight bikes early this month.

The crackdown came after a number of incidents were reported in which stunt junkies either lost their lives or injured others. Even a police constable was seriously injured in a similar incident recently.