After scripting a thumping victory against Narendra Modi-led NDA, the Bihar CM will have make good on his poll promises of a clean administration, providing piped water, toilets, pucca roads and unemployment allowance, reports Kavita Chowdhury 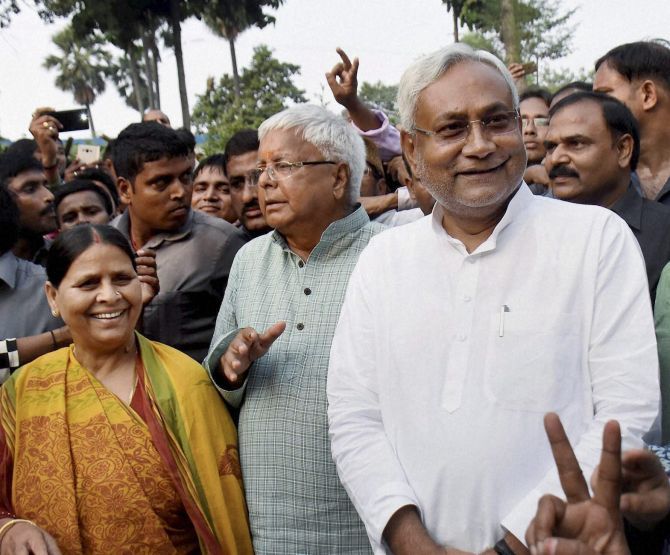 Nitish Kumar is set be sworn in for a third term in office, belying conventional trope of anti-incumbency. With a clear mandate in his favour, Kumar will have to make good his poll promises to dispel the Bharatiya Janata Party-stoked notion of a return to the jungle raj in the company of Lalu Prasad.

The alliance of the Janata Dal-United, the Rashtriya Janata Dal and the Congress had brought out a ‘common programme’ instead of the usual practice of a manifesto, keeping the promises simple. The alliance wooed voters with seven basic amenities, including piped water, toilets, pucca roads, and unemployment allowance.

The greatest challenge for Kumar will be to provide a clean and efficient administration. This will be keenly watched because many in his party have, in private, expressed misgivings about running a government in coalition with the RJD.

A JD-U leader had reportedly said they themselves were sceptical of the coalition actually working, if voted to power, given the different working styles of Prasad and Kumar. For one, it would be no mean task for the new government to cobble the Rs 2.7 lakh crore needed to fulfil the poll promises and other developmental agenda over the next five years. Incidentally, many perceived Kumar’s poll agenda as a bid to outdo Prime Minister Narendra Modi’s Rs 1.25 lakh crore Bihar package.

Kumar had wooed young voters, who had swung in favour of the BJP in 2014, with doles such as a student credit card scheme worth Rs 4 lakh for any student who has passed std XII. Kumar also promised students a loan from any bank, for which the government would give a three per cent discount on the interest. An unemployment allowance for youth aged 20-25 years would cost the exchequer Rs 49,800 crore.

Kumar will have to not only fulfil his poll promise of allotting a 35 per cent quota for women in government jobs but also find means to placate the youth segment who eye such opportunities for permanent employment. Incidentally, the women vote bank has consistently rooted for Kumar and he’s not disappointed them -- offering free cycles and free education for girls up to post graduation, free uniforms, etc.

In his two stints as chief minister, Kumar claims to have rid the state of lawlessness and brought development -- electricity, roads and education for girls. But, the state is still among the most backward in development indices. In his third stint, Kumar has promised to make up for this deficit by ensuring 24x7 power, pucca roads and piped water supply to each household.

After vanquishing Narendra Modi, who was the BJP’s face in the Bihar polls, political observers predict Kumar has his eyes set on 2019 general elections.

For now, Kumar will have to focus firmly on not only successfully steering the alliance but to deliver on the lofty ‘common programme’ he had set out for the government.

>> Pucca roads to every homestead
To cost exchequer Rs 78,000 crore

>>Facilities for higher education for students, 5 new medical colleges to be set up
To cost exchequer Rs 10,300 crore