Hope, disappointment as NDA surges ahead of Grand Alliance

With the Bihar poll trends showing the ruling National Democratic Alliance marching ahead of the Rashtriya Janata Dal-led Grand Alliance, the mood was buoyant among Bharatiya Janata Party and Janata Dal-United workers, but RJD and Congress activists looked disappointed, even though hoping for things to change in their favour. 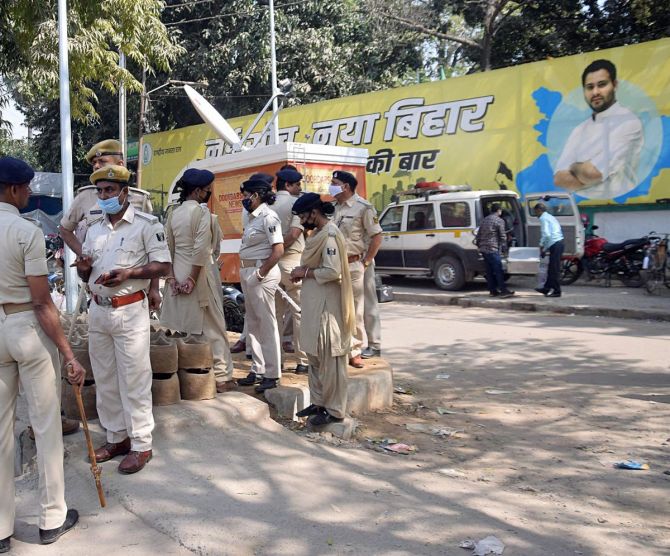 At the BJP office at Beer Chand Patel Path, where there was not much activity for the past three days after exit polls projected a majority for the Grand Alliance, several leaders and party workers have started coming in with beaming faces.

State BJP president Sanjay Jaiswal is in the office monitoring the results closely.

Bihar BJP spokesman Sanjay Singh Tiger said the BJP-JDU coalition has worked under the "double engine" governments -- NDA dispensations at the Centre as well in the state -- and the people of Bihar have blessed it.

"The people know Prime Minister Narendra Modi and chief minister Nitish Kumar can speed up development of the state and hence they have reposed their faith in the NDA," Tiger told reporters.

While chief minister Nitish Kumar is watching counting of votes at his official residence, some leaders and party workers have started thronging the party office, a stone's throw away from the office of the BJP and the RJD in the heart of Patna.

Bihar JD-U president Vasistha Narayan Singh said they were confident since the beginning that the people of the state would like the ruling coalition to continue and expedite the development process.

Asked about the BJP performing better than the JD-U and if chief minister Kumar will continue in the post, Singh said, "When top BJP leaders themselves have said that Kumar will be the CM irrespective of the individual scores of the alliance partners, is there any need to clarify this further?"

JD-U spokesman Ajay Alok said the people of Bihar have faith in Nitish Kumar and that is reflected in the trends in favour of the NDA.

In the RJD camp, which was on cloud nine till Monday with almost all exit polls indicating the party-helmed coalition coming to power in the state and its leader Tejashwi Yadav becoming chief minister, the initial euphoria appears to be dipping.

A crowd of Tejashwi supporters that had gathered outside the 10 Circular Road residence of former chief minister Rabri Devi expecting a victory is thinning now.

But some ardent supporters, carrying photographs of Tejashwi in Delhi Daredevils jersey from his IPL days and also him taking oath as CM, stay put in the hope that things will change for better with the progress of counting.

Bihar RJD spokesman Mrityunjay Tiwari said, "It's like a T-20 match. The result will be decided only when the last ball of the match is bowled."

In the Congress camp, initial excitement appears to have evaporated with the trends showing Grand Alliance trailing the NDA.

Scores of Congress leaders from across the country, including its general secretary Randeep Surjewala, who have arrived here in the hope of party forming a government with Mahagathbandhan partners are glued to TV channels hoping the trends will change in accordance to the exit polls.

"We are not far behind, things will change in our favour," state Congress spokesman Rajesh Rathor said. 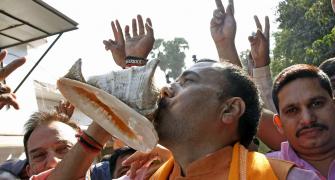 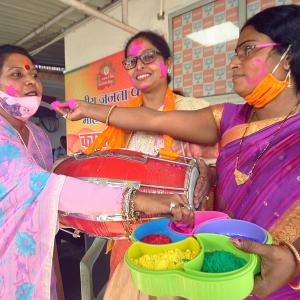