The Quad leaders, including United States President Joe Biden and Prime Minister Narendra Modi, on Friday vowed to strive for a 'free, open and inclusive' region unconstrained by 'coercion', in an apparent reference to China which is flexing its military muscles in the Indo-Pacific region and beyond. 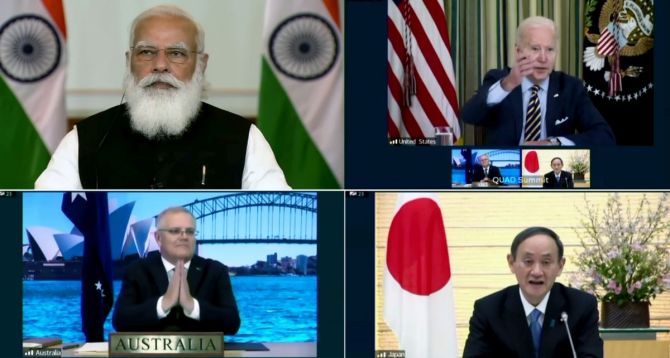 'We bring diverse perspectives and are united in a shared vision for the free and open Indo-Pacific. We strive for a region that is free, open, inclusive, healthy, anchored by democratic values, and unconstrained by coercion,' said the joint statement titled 'The Spirit of the Quad'.

The virtual Quad summit took place as China and India are involved in a military standoff along the Line of Actual Control (LAC) in eastern Ladakh since May last year.

After lengthy rounds of talks, the two sides simultaneously withdrew troops from the Pangong Lake area last month while talks are on for the withdrawal of soldiers from the rest of the friction points along the LAC.

In the East China Sea, Japan has maritime disputes with China.

'Together, we commit to promoting a free, open rules-based order, rooted in international law to advance security and prosperity and counter threats to both in the Indo-Pacific and beyond.

'We support the rule of law, freedom of navigation and overflight, peaceful resolution of disputes, democratic values, and territorial integrity,' the joint statement said.

It said the Quad leaders will continue to prioritize the role of international law in the maritime domain, particularly as reflected in the UN Convention on the Law of the Sea (UNCLOS), and facilitate collaboration, including in maritime security, to meet challenges to the rules-based maritime order in the East and South China Seas.

'We commit to work together and with a range of partners. We reaffirm our strong support for ASEAN's unity and centrality as well as the ASEAN Outlook on the Indo-Pacific.

'Full of potential, the Quad looks forward to the future; it seeks to uphold peace and prosperity and strengthen democratic resilience, based on universal values,' the joint statement said.

China has built up and militarised many of the islands and reefs it controls in the region. Both maritime areas in the South and East China seas are stated to be rich in minerals, oil and other natural resources and are also vital to global trade.

The Quad leaders also pledged to respond to the economic and health impacts of COVID-19, combat climate change, and address shared challenges, including in cyberspace, critical technologies, counterterrorism, quality infrastructure investment, and humanitarian-assistance and disaster-relief as well as maritime domains.

The statement said that Quad countries will 'begin cooperation on the critical technologies of the future to ensure that innovation is consistent with a free, open, inclusive, and resilient Indo-Pacific'.

They also reaffirmed their commitment to the complete denuclearisation of North Korea in accordance with UN Security Council resolutions and emphasised the urgent need to restore democracy in Myanmar and the priority of strengthening democratic resilience.

'To advance these goals and others, we will redouble our commitment to Quad engagement,' they said, adding that they are committed to leveraging 'our partnership to help the world's most dynamic region respond to historic crisis, so that it may be the free, open, accessible, diverse, and thriving Indo-Pacific we all seek.'

Known as the 'Quadrilateral Security Dialogue', representatives for the four member nations have met periodically since its establishment in 2007.