Kolam, a traditional Indian art form of drawing geometric patterns on the floors as a sign of welcome, was part of the virtual kick-off ceremony of the inauguration of President-elect Joe Biden and his deputy Kamala Harris, who traces her origin to Tamil Nadu where these auspicious designs adorn almost every household. 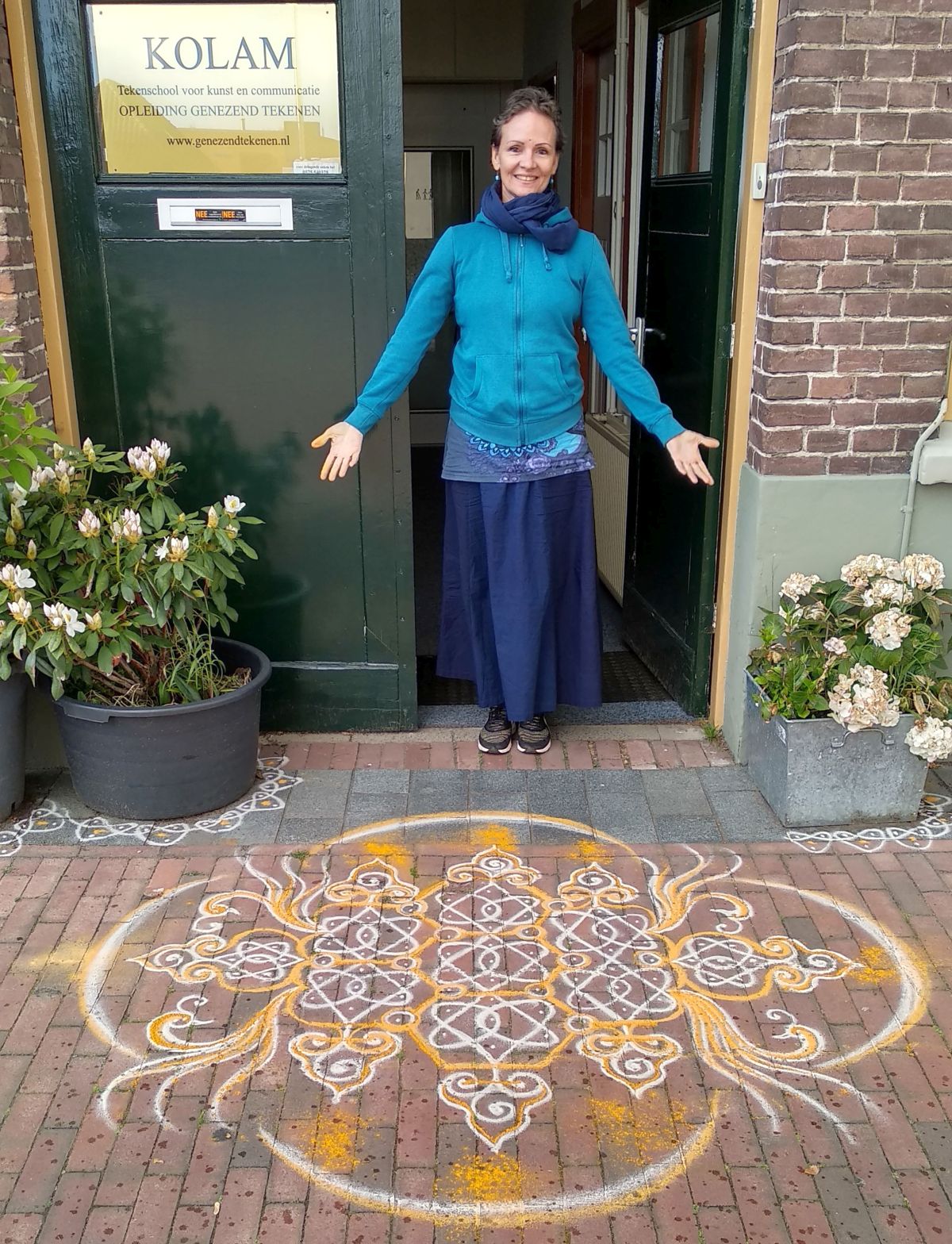 IMAGE: Indian-Americans draw Kolam as a part of the virtual kick-off ceremony of the inauguration of President-elect Joe Biden and his deputy Kamala Harris. Photograph: PTI Photo

In Tamil Nadu, where Harris has roots, women draw Kolams on the ground to invite health and prosperity into houses where they are displayed.

More than 1,800 individuals from across the United States and many from India participated in the online initiative to create thousands of Kolam designs to celebrate the historic event.

“Many believe Kolams symbolise positive energy and new beginnings. People of all ages from various communities collaborated from their homes to create tiles with eco-friendly materials. What started out as a local project spread way beyond our expectations,” said Shanthi Chandrasekar, an award-winning multimedia and multidisciplinary artist from Maryland who took the initiative along with several others.

The initial idea was to have these Kolam patterns from across the country in front of the White House as a symbol of good beginning to the new administration.

The Washington DC police gave permission to the organisers to have it near the Capitol Hill around the inauguration venue. However, due to the unprecedented security measures that have been enforced in Washington DC, the permission was cancelled.

A date for the installation after the inauguration will be set up after a go-ahead from the local security, said Sowmya Somnath who is part of the Inauguration Kolam 2021 organising team in her volunteer capacity.

Washington DC Public Schools arts director Mary Lambert and visual arts manager Lindsey Vance joined Chandrasekar to combine thousands of Kolam drawings made by people from many different backgrounds to welcome Biden when he takes office in a few days.

Hundreds of artists, citizens and students from across the country collaborated online to combine thousands of local pieces.

“This is what we wanted when we planned to have thousands of Kolam tiles in front of the White House,” said Somnath.

Students from 10 public schools in Washington DC participated in making the art.

Lambert said the District of Columbia Public School arts curriculum focuses on equity and believes cultural representation is an important part of that effort.

“This project provided an opportunity for our students to learn about another culture and the math skills needed for creation in the arts. As well, an opportunity to express their identity through visual arts and to see that united with others from around the country,” said Lambert.

Major Democratic fund raiser Shekar Narasimhan, whose niece and grandniece joined many others to make tiles for the inauguration Kolam, supported the project.

Narasimhan said the project reflects and honours the history of America.

“With the rise of diverse America, the energy behind this artwork is a reminder of what binds us together as Americans,” he said.

“I am so grateful and honoured to be able to share my love for Kolams through the #2021kolam community project. The real celebrities are the children who have invested so much of themselves into beautifying the dots and the shapes around them that will come together for our collaborative welcome offering for Inauguration Kolam #2021,” Chandrasekar said.

Biden and Harris will take the oath of office on January 20.