United States President Donald Trump and his Democratic rival Joe Biden fiercely clashed over a number of issues, including the COVID-19 pandemic, racism, economy and climate, during the first presidential debate, marked by angry interruptions and bitter accusations. 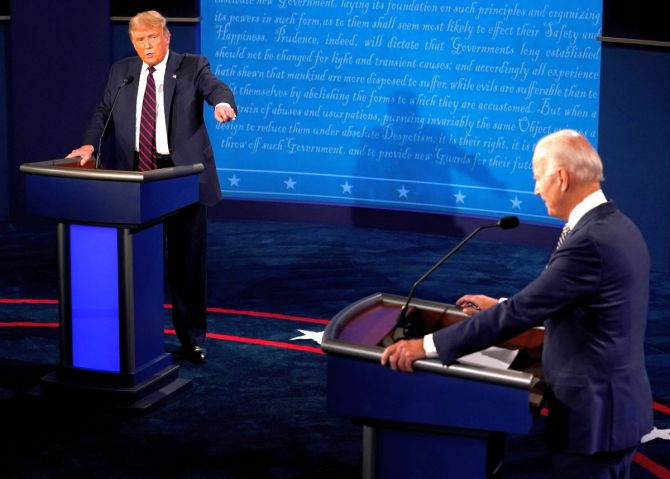 During the first of the three presidential debates in Cleveland, Ohio, on Tuesday night moderated by Fox News anchor Chris Wallace, 74-year-old Trump and his 77-year-old rival Biden also traded barbs about each other's families, making it one of the most chaotic White House debates in years.

"The fact is that everything he's (Trump) saying so far is simply a lie. I'm not here to call out his lies. Everybody knows he's a liar," Biden said.

Trump responded, saying Biden is a liar and graduated last in his class.

Attacking Trump over the handling of the COVID-19 pandemic that has killed more than 200,000 people and infected over 7 million in the US, Biden said the president has "no plan" to fight the deadly disease and he lied to Americans.

"He still hasn't even acknowledged that he knew this was happening, knew how dangerous it was going to be back in February, and he didn't even tell you. He is on record as saying it. He panicked or he just looked at the stock market, one of the two, because guess what, a lot of people die and lot more are going to die unless he gets a lot smarter, a lot quicker," he said.

Trump hit back, saying, "don't ever use the word smart with me."

As the two rivals clashed on medicate, Trump said the Democrats were planning socialising of medicine. Biden replied, "What this clown is doing?"

Trump also justified his administration's decision to withdraw from the Paris climate deal, saying the agreement was a "disaster".

Biden, however, vowed to rejoin the historic accord if voted to power.

They also clashed over the issue of racism in America during the debate wherein the Republican leader hesitated to condemn white supremacists.

"Are you willing, tonight, to condemn white supremacists and militia groups and to say that they need to stand down?" the moderator asked Trump.

"I'm letting people out of jail now," he said to Biden. "You've treated the black community as bad as anyone in the country. You called them superpredators and you've called them worse than that."

The former vice president was also critical of Trump's handling of the events after the death of African-American George Floyd in police custody in Minneapolis.

Biden described Trump as the "worst president America has ever had."

On nominating Judge Amy Coney Barrett for the Supreme Court to fill up the vacancy following the death of Judge Ruth Bader Ginsberg, Trump said: "We won the election and we have a right to do it".

Trump also rued that Biden was getting better press than him.

"They give you good press. They give me bad press because that's the way it is, unfortunate...I don't care. I've gotten used to it. But I'll tell you, Joe, you could never have done the job that we did. You don't have it in your blood," Trump added.

Biden also branded Trump "a fool", when the president was talking about the large crowd that he has been drawing in the election campaign.

Hitting back, Trump said nobody shows up to Biden's rallies.

Trump also expressed hope that the November 3 election would be "fair" and urged his supporters to watch "very carefully" the entire voting process to ensure there is nothing fraudulent.

Trump raised concerns over the use of mail-in ballots, saying there are high chances of the process getting manipulated.

"I hope it's going to be a fair election, and if it's a fair election, I am 100 per cent on board, but if I see tens of thousands of ballots being manipulated, I can't go along with that,” Trump said, in his latest instance in which the Republican leader has refused to commit to accepting the results of the polls.

"Here's the deal. The fact is that I will accept it and he (Trump) will too. You know why? Because once the winner is declared after all the ballots are counted, all the votes are counted, that will be the end of it,” Biden said.